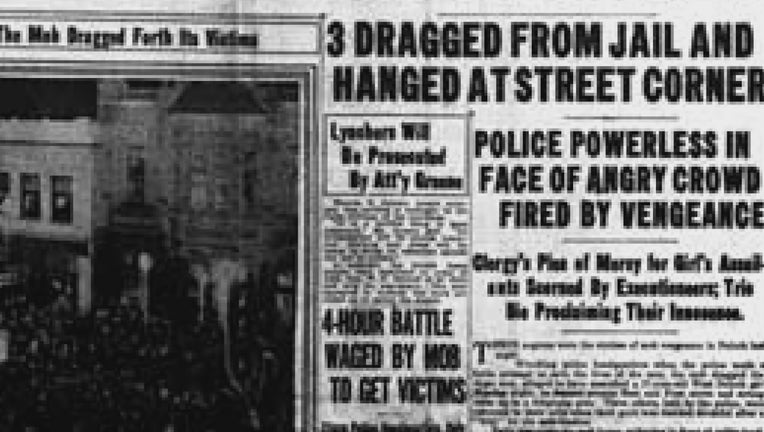 The three-member Minnesota Pardon Board, which includes Walz and Ellison, voted unanimously Monday to review the case of Max Mason, one of six black men arrested in June 1920 for the alleged rape of a white woman in Duluth. Three of the men were dragged from their jail cell and killed by a white mob of up to 10,000 people in the street. No one was ever convicted for those killings.

Support from Governor Tim Walz and Attorney General Keith Ellison means Max Mason's 1920 rape conviction will be reviewed. It will be the first time Minnesota's Pardon Board will consider whether to pardon a dead person.

Mason was sentenced to up to 30 years in prison for the rape, though key legal officials later said there was little evidence linking him to a crime. His case has recently received new attention as the 100-year mark of the incident approaches.

"This is one of those occasions where justice delayed may not be justice denied," Ellison told reporters Monday. "I think we can try to rectify the problems of the past. We all need healing, and I think it’s important to review this matter."

It would be the first time the Minnesota Pardon Board has considered pardoning a dead person, a spokesman for Walz said.

Mason’s case has received new attention from a Duluth-based nonprofit, the Clayton Jackson McGhie Memorial, which honors the three men killed in the lynching.

"For us, it’s about healing," organizer Jordan Moses said in an interview. "Max Mason’s conviction is tied to the lynchings in Duluth and the culture of racism and white supremacy and the legacy of the lynchings."

Mason was a traveling circus worker who had arrived in Duluth in June 1920 for an event in town. The Minnesota Historical Society has many documents about his conviction and efforts to be pardoned.

It's unclear what information the Minnesota Pardon Board had when it denied Mason's request in 1924. The St. Louis County attorney and the trial judge in Mason's case both said the evidence against him was weak, according to historical society records.

The state's parole board granted him parole in 1925, ordering him to leave Minnesota. There's no record that Mason ever returned.

"We have a responsibility to finish that and follow through and pardon him posthumously," he said.

The pardon denial in 1924 weighs heavily. Because of that, two of the three Minnesota Pardon Board members must agree to reconsider the case.

However, there's uncertainty whether the board has authority to ultimately grant a posthumous pardon.

Walz said the board would ask its legal counsel to review the situation before the next meeting in 2020.

"I think it certainly warrants us taking a look at it," Walz told reporters. "I think there were enough questions that were raised immediately after the conviction that this is one we should look at."

Little is known about Mason’s life outside of the infamous Duluth case.

This fall, Ellison tweeted a request to find Mason’s family members. None have come forward, an Ellison spokesman said Monday.

The nonprofit group championing Mason’s cause said no known photo exists of him.