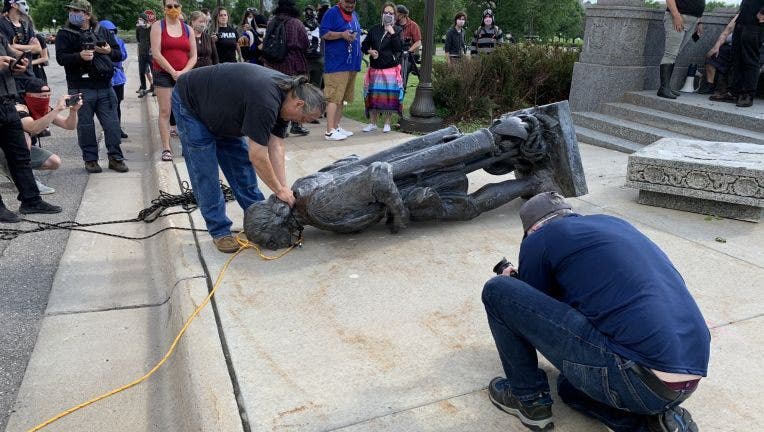 Christopher Columbus statue is taken down outside the Minnesota State Capitol. (FOX 9)

ST. PAUL, Minn. (FOX 9) - Some lawmakers are calling for the return of the Christopher Columbus statue that protestors toppled outside the Minnesota State Capitol last summer.

Protesters tore down a statue of Christopher Columbus outside the Minnesota State Capitol on June 10, 2020.

Once a widely celebrated explorer credited with "discovering America," Columbus' legacy has grown controversial as more attention has been paid to the atrocities Columbus and his followers committed after coming to the New World.

Mike Forcia, an organizer with the American Indian Movement, led a group of more than 100 protesters on the state Capitol grounds June 10. Protesters tied two ropes around Columbus's bronze neck, started tugging, and brought the statue crashing to the ground.

Forcia was the only person charged in connection to the protest. Through a plea deal, the charge was suspended and he was ordered to complete 100 hours of community service.

The bill now heads to the Senate floor.