The White House is extending the pause on federal student loan payments through the end of June 2023 in an effort to "alleviate uncertainty" for borrowers.

WASHINGTON - President Joe Biden announced Tuesday that his administration will extend a pause on federal student loan payments while the White House fights a legal battle to save his plan to cancel portions of the debt.

"It isn't fair to ask tens of millions of borrowers eligible for relief to resume their student debt payments while the courts consider the lawsuit," Biden said in a video posted on Twitter.

The moratorium was slated to expire Jan. 1, a date that Biden set before his debt cancellation plan stalled in the face of legal challenges from conservative opponents.

Biden’s plan promises $10,000 in federal student debt forgiveness to those with incomes of less than $125,000, or households earning less than $250,000. Pell Grant recipients, who typically demonstrate more financial need, are eligible for an additional $10,000 in relief.

More than 26 million people already applied for the relief, with 16 million approved, but the Education Department stopped processing applications this month after a federal judge in Texas struck down the plan.

The Justice Department last week asked the Supreme Court to examine the issue and reinstate Biden’s debt cancellation plan. By extending the pause, the administration says it's giving the court a chance to resolve the case in its current term.

Biden announced the decision a day after more than 200 advocacy groups urged him to extend the pause, warning that starting payment in January would cause "financial catastrophe" for millions of borrowers.

The White House has argued in court that Americans continue to feel the financial stress of the pandemic. Without Biden's cancellation plan, it says, the number of people falling behind on student loans could rise to historic levels.

The greatest risk is for about 18 million borrowers who were told their entire loan balance would be canceled. Even if payments restart, those borrowers might think they’re in the clear and ignore the bills, the Education Department has warned.

But at the same time, the White House has warned that extending the payment pause will cost several billion dollars a month in lost revenue. The moratorium has already cost the government more than $100 billion in lost payments and interest, according to the General Accountability Office.

The Biden administration didn't address the costs in its announcement, but instead cast blame on Republicans challenging the plan.

"Callous efforts to block student debt relief in the courts have caused tremendous financial uncertainty for millions of borrowers who cannot set their family budgets or even plan for the holidays without a clear picture of their student debt obligations," Education Secretary Miguel Cardona said.

"It's just plain wrong," he added. 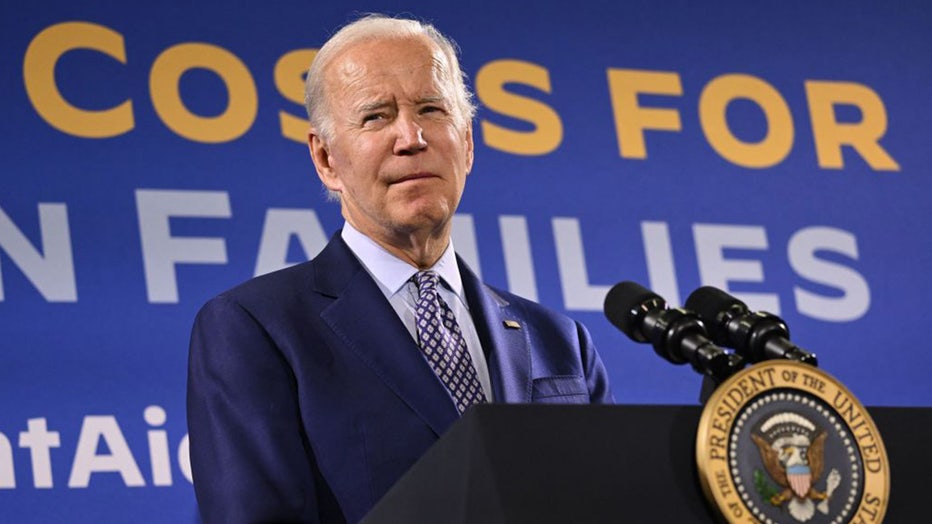 Critics such as the Committee for a Responsible Federal Budget have opposed any further extension, saying it could worsen inflation and raise the risk of economic recession.

But supporters of Biden's plan applauded the action, saying it provides a cushion to working-class Americans.

"This extension means that struggling borrowers will be able to keep food on their tables during the holiday season — and the coming months — as the administration does everything it can to beat back the baseless and backward attacks on working families with student debt," said Mike Pierce, executive director of the Student Borrower Protection Center.

The legality of broad student debt cancellation has been in question since before Biden took office. Supporters say federal law already gives the Education Department wide flexibility to cancel student loans, while opponents argue that only Congress has the power to cancel debt at that scale.

In announcing its plan, the Biden administration invoked the HEROES Act of 2003, a post-Sept. 11, 2001, law meant to help members of the military. The Justice Department says the law offers sweeping authority to cancel student debt during a national emergency. Biden has said the relief is needed to help Americans recover from the pandemic.

A federal judge in Texas struck down that rationale this month, saying Biden overstepped his power. The HEROES Act "does not provide the executive branch clear congressional authorization to create a $400 billion student loan forgiveness program," wrote District Court Judge Mark Pittman, who was appointed by former President Donald Trump.

The Justice Department is asking an appeals court in New Orleans to suspend Pittman's order while the administration appeals. It's separately asking the Supreme Court to overrule a federal court in St. Louis that halted Biden's plan in response to a lawsuit from six Republican-led states.