The United States military has carried out a drone strike against an alleged ISIS-K "planner" following a suicide bombing in Kabul that killed 13 American soldiers and at least 70 Afghans.

Their remains returned to U.S. soil at Dover Air Force Base in Delaware. The Bidens met privately with their relatives and then attended the "dignified transfer," a military ritual of receiving the remains of those killed in foreign combat.

It wasn't Joe Biden's first dignified transfer. He attended many as vice president. But It was his first since taking officer earlier this year.

The Bidens were joined by several top aides, including Defense Secretary Lloyd Austin, chairman of the Joint Chiefs of Staff Gen. Mark Milley, and Secretary of State Antony Blinken. The Bidens said a prayer inside the plane that carried the remains of the fallen troops before returning to the tarmac. 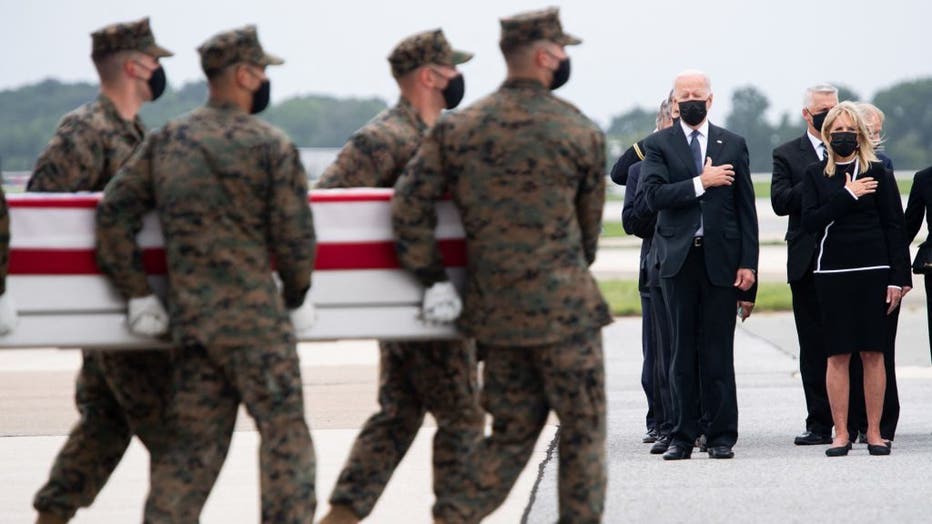 President Joe Biden attends the dignified transfer of the remains of a fallen service member at Dover Air Force Base in Dover, Delaware, Aug. 29, 2021, one of the 13 members of the US military killed in Afghanistan last week. (Photo by SAUL LOEB/AFP

Silence came over the attendees as the bodies were removed and placed in transport vehicles. The Bidens held their hands over their hearts while the military attendees offered salutes.

Eleven of the fallen service members’ families chose to allow their transfers to be open to media coverage.

The Department of Defense identified the fallen as a Navy sailor, Army soldier and 11 Marines. They are as follows:

Five of them were just 20 years old, barely old enough to have lived through the Sept. 11 attacks that sparked America’s war in Afghanistan.

American and Western forces have been drawing down their presence in recent months, which the Taliban capitalized on as they swept back into power. This culminated with the fall of Kabul on Aug. 15.

Since then, Afghans have flocked to the airport in Kabul, desperate to get out of the Taliban’s reach. American troops have been facilitating their evacuation, making the Kabul airport a prime target for an attack.

Biden called the slain troops "heroes who made the ultimate sacrifice."

"Their bravery and selflessness has enabled more than 117,000 people at risk to reach safety thus far," Biden said. "May God protect our troops and all those standing watch in these dangerous days." 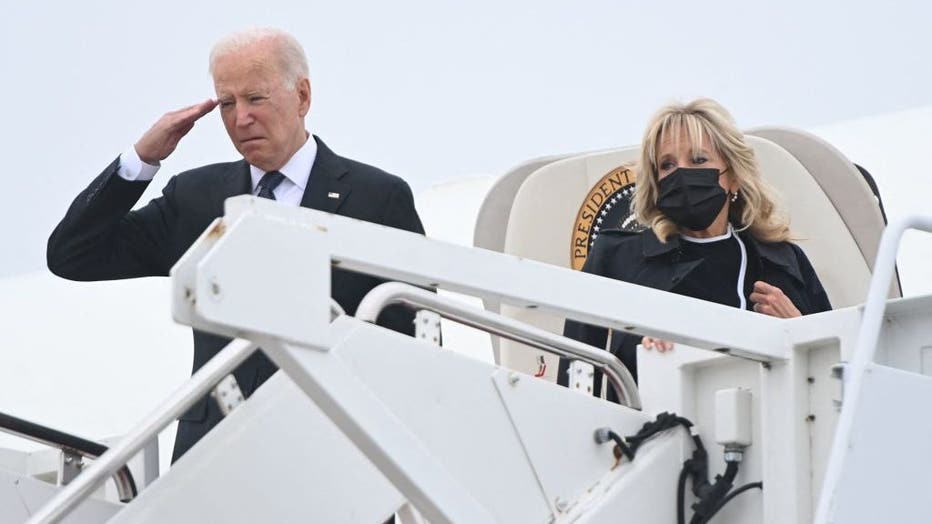 President Joe Biden boards Air Force One prior to departure from Joint Base Andrews in Maryland, Aug. 29, 2021. (Photo by SAUL LOEB/AFP via Getty Images)

Family members of the fallen often travel to Dover to be present as flag-draped transfer cases are taken off the transport plane that returns them to American soil.

Aside from the quiet commands of honor guards who carry the transfer cases, the short prayers of the chaplain typically are the only words spoken during the ritual.

ISIS-K, an offshoot of the Islamic State group, conducted the attack on Thursday. In addition to American troops, the attack claimed the lives of more than 160 Afghans.

RELATED: US drone strike against ISIS-K in Afghanistan won't be the last, Biden says

"I said we would go after the group responsible for the attack on our troops and innocent civilians in Kabul, and we have," Biden said in a statement. "This strike was not the last. We will continue to hunt down any person involved in that heinous attack and make them pay."