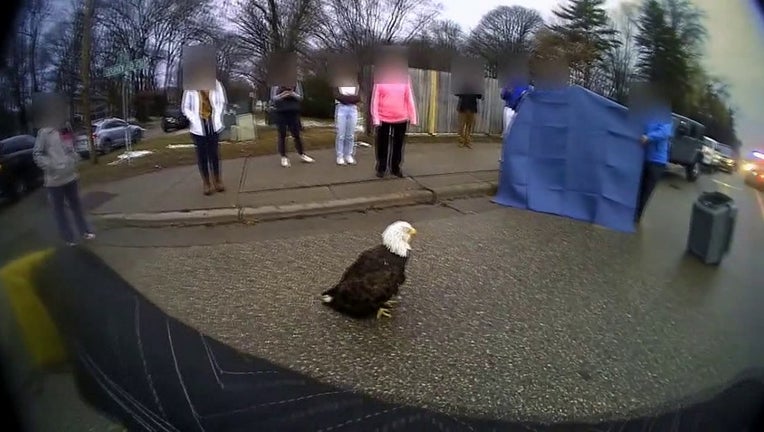 Plymouth PD's rescue of an eagle was captured on body cam video. (FOX 9)

PLYMOUTH, Minn. (FOX 9) - When the call came into Plymouth Police to rescue an animal, Community Service Officer Emily Payne was on her way. But what she found at the side of the road was very different.

"I had never seen an eagle that close before, so it was amazing."

When the call came into Plymouth Police to rescue an animal, Community Service Officer Emily Payne was on her way. But what she found at the side of the road was very different.

The bald eagle had seemingly been struck by a car either flying after prey or feeding on carrion along the side of the road. Neighbors saw the bird struggling and called for help.

"I was hitting every red light, of course, and I was just cruising along and when I got there I was in shock," recalled Payne.

The eagle was a large female and was standing on the side of the pavement seemingly unable to move. Payne had rescued owls before, but never an eagle.

Still, she knew exactly what to do and reached for the large blanket in the back of her pickup truck.

"Birds, once their eyes are covered with a blanket, usually they tend to be more calm," explained Payne.  "So I just went over there with the bike gloves on, and I draped the blanket over her."

"Hi sweetheart," Payne said as she slowly approached the eagle.  Once she got the eagle wrapped up, Payne placed her in an animal kennel that she also has in the back of her truck.

"Easy peasy," she said on the body camera video. 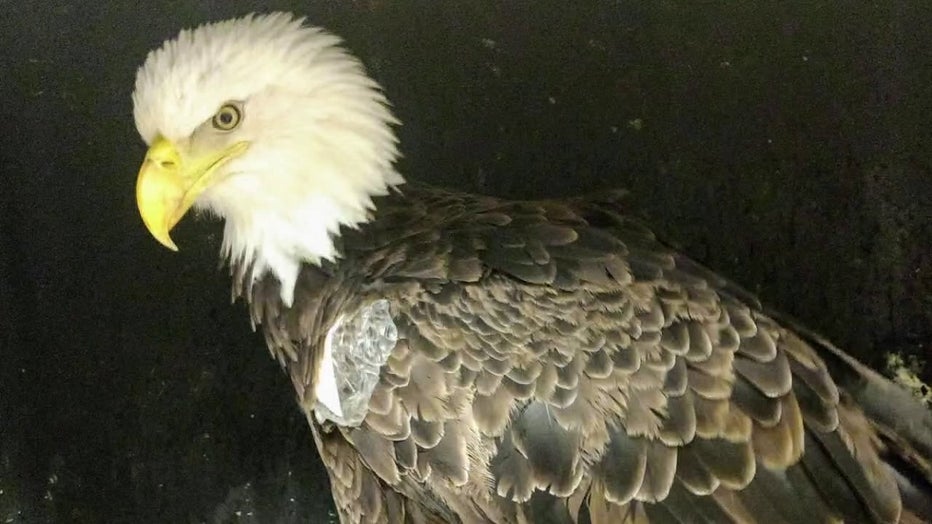 The eagle is now recovering at the University of Minnesota Raptor Center where veterinarians say she is regaining strength.

Dr. Hall explained how the eagle did not suffer any broken bones, but had internal injuries, especially bruising to her lungs. They did observe that she had also been previously shot, but the wound had healed. The eagle is now off of oxygen and getting feisty with her caregivers.

"Which is how we want our patients," explained Dr. Hall.  "We want them not to want us around so they can go back and be wild birds."

The Raptor Center hopes to give the eagle another couple of weeks to fully heal from her trauma before releasing her back into the wild.

At the very end of the rescue on the Payne’s body camera video she proudly proclaimed, "I did it!" The bystanders gathered along the side of the road all applauded.

"So, she did a great job and in making sure that this bird that needed help got a second chance at life," said Dr. Hall of Emily Payne’s efforts to save the eagle. "So it's because of the community that the Raptor Center can help over a thousand birds a year."

For Payne, it was just another day on the job as a community service officer—but a pretty good one.

"Hopefully, I can see her again soaring in the sky soon," she said.