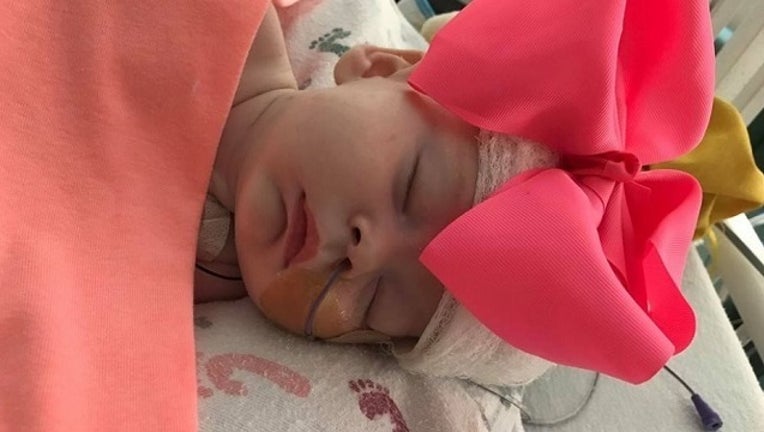 A 2-month-old baby girl can once again breathe on her own after sustaining a brain injury from an overthrown softball several weeks ago. (Facebook/Healing for McKenna)

(FOX NEWS) -- The 2-month-old baby who was severely injured in a softball accident earlier this month is breathing on her own for the first time in weeks. McKenna Hovenga’s great-aunt, who has been keeping the infant’s hundreds of thousands of supporters updated on the “Healing for McKenna” Facebook page, said the progress is “huge.”

“We were very worried that her troubles were related to her brain injury and we are so very thankful that this is not the case!” Laura Heise posted on Friday.

On Thursday, doctors had removed McKenna’s breathing tube after she had fared well during several breathing tests. The following 24-hour period was a rollercoaster of emotions for the family. McKenna’s oxygen levels dropped, and doctors administered a Lasix as well as breathing treatments and steroids to help her normalize. On Friday, they performed a scope over concerns about her airway narrowing.

“This morning, they performed a more detailed exploratory procedure to determine the issue with her airway laparoscopically,” Heise posted, in part. “Upon further examination, it was determined that McKenna has what’s called ‘intubation laryngitis’ in which granular tissue can build up and narrow the airway. This is completely normal and is usually from the trauma of intubation and can be caused from the rubbing of the vent tube during extended intubation.”

Heise posted photos of McKenna’s airway before and after the scope, illustrating that doctors had removed the granular tissue.

Heise said her great-niece, who has been hospitalized at the Mayo Clinic in Rochester, Minn., since the accident in early May, rested comfortably on her side following the procedure.

“Many tears were shed yesterday in sorrow and in anguish of watching what she was enduring and now knowing more about what’s ahead,” she said. “Today we’re crying tears of relief, joy and thankfulness! We know that this roller coaster ride of emotions is how it’s going to be for quite some time, but it sure is better to cry happy tears than it is to cry the sad ones. We feel like we’re breathing easier too! Way to go, Kenna-baby!!!!”

Earlier posts have indicated that doctors have prepared the family to handle McKenna’s recovery one day at a time. A previous scan indicated the possibility of severe damage in one area of the brain. McKenna has also suffered numerous seizures since an overthrown softball hit her, fracturing her skull.

The family has been sharing videos of McKenna with her eyes open and squeezing her mother’s fingers. McKenna was at the park with her parents, waiting for her dad’s softball team to take the field, when the tragedy occurred.