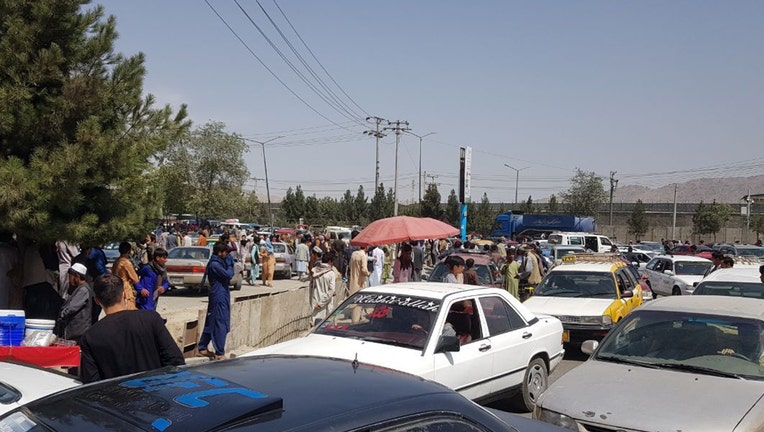 Pedestrians, motorists ended up in a traffic grid lock as the Afghans rush to safety with the uncertainty and rumor swirling that Taliban enter the city and take over, Kabul, Afghanistan, Sunday, Aug. 15, 2021. (Getty Images)

MADISON, Wis. (AP) - Hundreds or even thousands of Afghan refugees could be headed to Fort McCoy in western Wisconsin for processing, according to Pentagon officials.

Afghans are scrambling to find ways to escape after the Taliban overran their country over the last week. The Taliban initiated the blitz with U.S. troops weeks away from the Aug. 31 withdrawal deadline.

Afghan Americans in Minnesota 'shattered' over Taliban takeover in Afghanistan

Afghan Americans in Minnesota say they are shattered over the Taliban takeover in Afghanistan.

Garry Reid, director of the Department of Defense’s Afghanistan Crisis Action Group, told reporters Monday that the U.S. Army is working to set up reception centers for Afghan refugees at Fort McCoy and Fort Bliss in Texas. He said the Army is preparing to receive as many as 22,000 refugees at the two bases as well as at Fort Lee in Virginia.

Fort McCoy spokeswoman Tonya Townsell told the Milwaukee Journal Sentinel on Monday that the base, located between Tomah and Sparta, has been notified it will receive refugees and is prepared to house them in soldiers’ barracks as well as provide them with food and medical care.

TALIBAN SEIZES AFGHANISTAN: What happened and what could come next

Fort McCoy officials referred Associated Press inquiries Tuesday to the Department of Defense. DOD spokesman Lt. Col. Chris Mitchell said in an email to The Associated Press that the department hasn’t made a final decision on where refugees will be processed but teams are visiting Fort Bliss and Fort McCoy to determine if the bases will be adequate.

The last time Fort McCoy served as a refugee center was in 1980, when the base housed 14,000 Cubans who fled from Fidel Castro’s government.