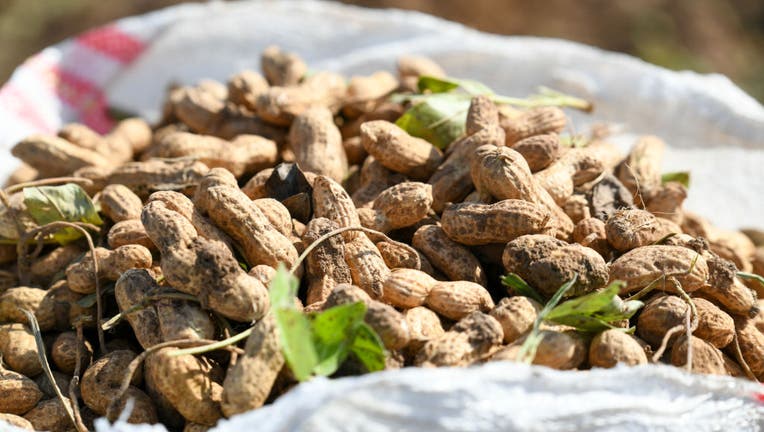 Farmers in the village of Muhammadiyah in the countryside of Aleppo harvest the peanut crop, or what is known (Pistachio Al-Obeid) in northwest Syria, where the pictures show workers and farmers cleaning the roots of the peanuts by hitting them on me

ADELAIDE, Australia - A new study suggests boiling peanuts could help those who suffer from a peanut allergy.

Researchers believe the heat in boiling peanuts "can affect the structure and immunoreactivity of peanuts."

"Oral immunotherapy using boiled followed by roasted peanuts represents a pragmatic approach that appears effective in inducing desensitization and is associated with a favourable safety profile," the authors wrote.

Millions of Americans have food allergies, including about 1 in 13 children, and the numbers have increased in recent years. Peanut allergy is the most common one among children, and among the most dangerous. Accidental exposures are frequent, with about 1 in 4 affected children winding up in the emergency room every year.

While treatment for peanut allergies exists, it is only approved for ages 4 and older and protects against accidental exposure to small amounts of peanuts.

The U.S. Centers for Disease Control and Prevention says there’s currently no cure for the allergy.

In a 2022 study in the journal The Lancet, a clinical trial funded by the National Institutes of Health (NIH) found that giving peanut oral immunotherapy to children ages 1 to 3 years old who are highly peanut-allergic induced remission of that allergy in one-fifth. The authors gave toddlers daily increasing amounts of peanut protein powder to a group of toddlers for 2.5 years.

Most of the children had a reaction during treatment, mostly mild to moderate. Some in the peanut group required treatment with an EpiPen.

In a news release, the NIH said those who started the process with lower levels of peanut-specific antibodies were most likely to achieve remission.

FOX News and the Associated Press contributed to this report. This story was reported from Los Angeles.