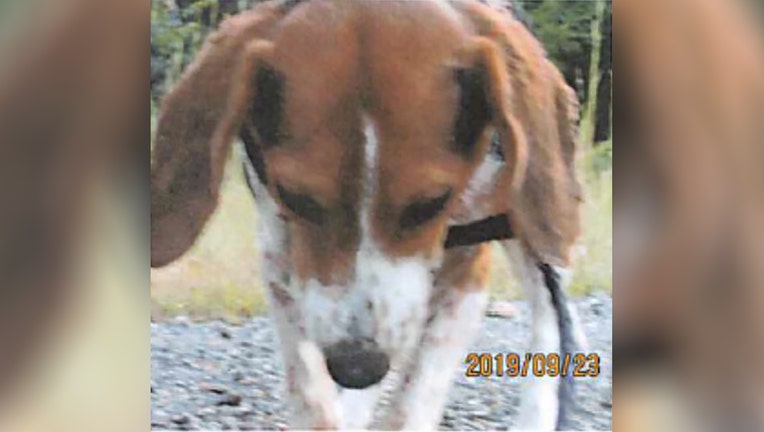 An $8,000 reward is being offered for information leading to arrest in what the Humane Society of the U.S. called a “heinous” case involving a female beagle being skinned alive in Neosho, Missouri. (Photo: Neosho Police Department)

NEOSHO, Mo. - An $8,000 reward is being offered for information leading to arrest in what the Humane Society of the U.S. called a “heinous” case involving a female beagle being skinned alive in southwest Missouri.

On Sept. 23, 2019, at approximately 5:30 p.m., officers were responding to an animal abuse complaint when they found a female beagle that had approximately 75 percent of her skin removed while she was still alive, the Neosho Police Department said in a press release.

“The animal either escaped from the assault or was set free in this condition,” the police department said. “Officer caught the injured animal, and after consulting veterinary staff, the animal had to be euthanized to end its suffering.”

Neosho police Lt. Jason Baird said the dog’s entire backside was removed from its neck to its tail and down to the top of its legs. He said a resident reported seeing the injured animal emerge from a wooded area. Baird said the beagle was in obvious pain when officers caught it.

The dog had escaped from its residence while her owners were away, police said. Baird said the dog may have gotten out through an unsecured door. When the owners left town, the beagle was not in her mutilated state, according to police.

The community has contributed $3,000 to the reward.

The Humane Society of the U.S. announced Thursday that it is also offering a reward of up to $5,000 for information leading to the identification, arrest and conviction of the person or persons responsible for the “recent cruel and thoughtless torture” of the beagle. Their reward is in addition to cash rewards currently being offered in the case.

“It takes a truly callous person to skin a dog alive and it’s completely heartbreaking to imagine the suffering this dog endured,” said Amanda Good, Missouri state director for the Humane Society of the U.S. “We hope that this reward will encourage anyone with information about this terrible crime to come forward, not only to help seek justice for this animal, but also to ensure the safety of the entire community.”

Neosho police provided a facial photo of the beagle victim “in hopes someone witnessed the injured dog leaving the suspect location or heard the assault take place.”

The humane society added that “securing the serious attention and engagement of law enforcement officials, prosecutors and residents in cases involving allegations of cruelty to animals is an essential step in protecting the whole community.”

KOAM-TV reported that anyone wanting to donate to increase the reward can do so at the front desk of the Neosho City Hall.

The Associated Press contributed to this report. This story was reported for Los Angeles.