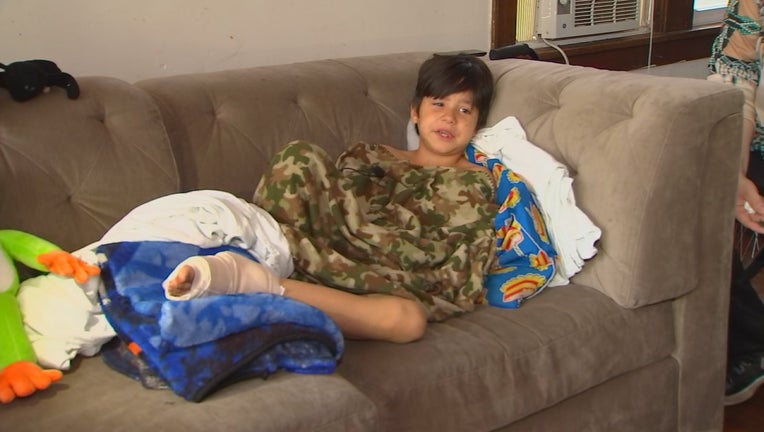 MINNEAPOLIS (FOX 9) - A seven-year-old boy is recovering Wednesday after he was shot in the foot during a drive-by shooting in Minneapolis Tuesday.

The boy was out getting snacks with his dad when he was shot. Now, he’s sad and scared and his foot just hurts.

7-year-old boy shot in foot while shopping with dad

A young boy was shot in the foot while he was out shopping with his dad.

He is recovering at home with his foot wrapped up tight after it was hit with a bullet that went in and chipped a bone before coming out the heel.

He and his dad were at a convenience store on the 1100 block of Lowry Avenue North. They were just stepping out when someone drove by and started shooting from a car.

“We took one step out the door and I heard what sounded like fireworks first and second until I heard, ya know, you realize it’s the gunshots and it just felt like it was right towards us,” said Vaulter’s father.

“I started hopping back, holding on the shelves and hopping back there,” Vaulter said. “And then I took a seat down. And then my dad was right next to me and he took one of his shirts and he wrapped it around and then the other guy, he went in the cooler, he put a bag of ice right below it and then my dad said, ‘You’re gonna be OK.’ And then some other people went next to me and said, ‘You’re gonna be OK.’”

He remembers every terrifying second. His dad was screaming for an ambulance, which arrived shortly after.

“Then they picked me up and brought me outside,” he recalled. “they sat me down on a chair. They put me in the trunk of the ambulance and they were zooming to the hospital.”

Vaulter’s foot will be OK, but he is scared, as is his dad. They are both tired of all the violence.

“This is the third time in the last three months we’ve been dodging bullets,” his dad said. “One came through the window a couple weeks ago. So, it’s time to go.”