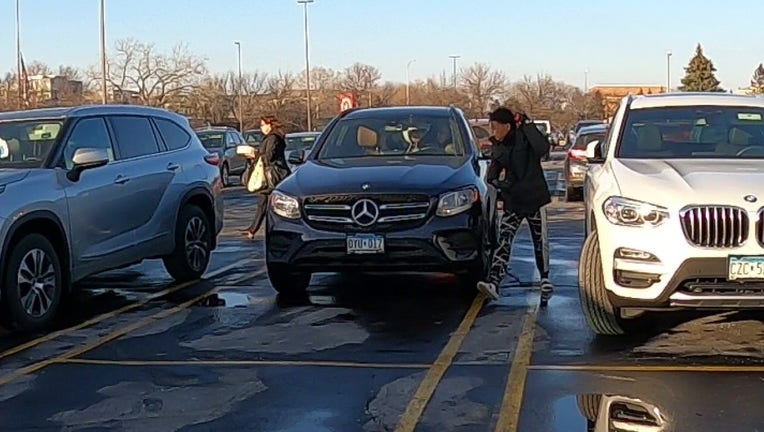 A photo from FOX 9's footage at Lunds in St. Louis Park during the carjacking attempt on December 9. (FOX 9)

News of the arrests come on the same day mayors, city managers and police chiefs from Edina, Bloomington, Eden Prairie, Minnetonka and Plymouth met to discuss the recent increase in property and vehicle-related crimes in the metro.

In a press release, prosecutors outlined the accusations against the teens for the attacks on December 9.

During the first incident, at the Lunds in St. Louis Park at 3:15 p.m., the victim told police he was in his SUV when the boys tried to pull him out, repeatedly punching him and threatening him with a drill they implied was a gun. Prosecutors say the victim suffered multiple injuries as a result of the beating. A FOX 9 news crew happened to be in the parking lot, covering a previous robbery, at the time of the attack and helped scare off the attackers along with another bystander who prosecutors say got into a physical altercation with the suspects.

Less than two hours later, two of the boys were involved in an attack at the Lunds in Edina. During that incident, police say the boys were in a white SUV that pulled into a parking spot next to a woman sitting in a vehicle. Two of the boys climbed into the woman passenger side doors, one in the back and the other in the front, and tried to pull her out.

The victim said as the boys threw punches, she honked her horn to try and get help. She was bitten in the process.

As the rise in carjackings continue in Minneapolis and the metro-at-large, Minneapolis city leaders are promising action.

Eventually, prosecutors say the boys put the vehicle into reverse and struck a man in the head with the driver's side door, and ran over his legs. The woman in the vehicle got caught up in her seatbelt as she was dragged out of the car while it was moving.

A third person carrying a legal firearm then intervened by pulling his gun. At that point, the teens jumped out of the vehicle and ran away.

In the hours after the attacks, police released photos of the suspects, and tips from the public helped investigators make an identification. During a search warrant at one of the teen's homes, police found clothing that matched what the suspects were wearing on the day of the attack.

Two of the teens appeared in court on Monday and are being held as prosecutors look to charge them as adults.