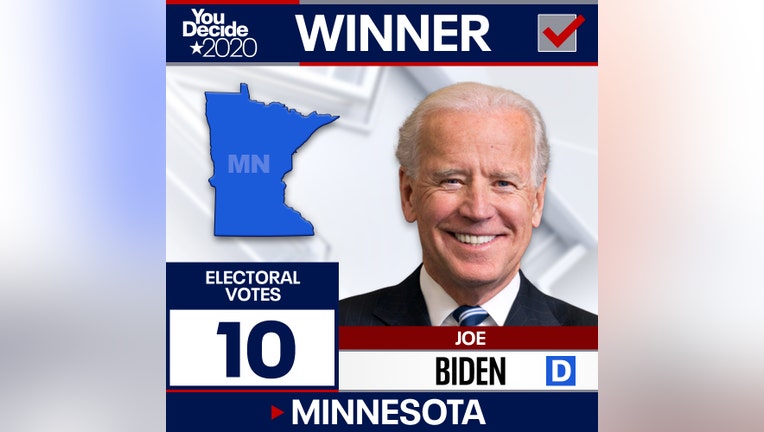 The Associated Press projects Joe Biden will win the state of Minnesota.

As of 1 a.m. Wednesday, Biden had won about 52 percent of the vote compared to President Donald Trump's 44 percent. About 93 percent of precincts in the state have reported results.

In 2016, Democratic presidential candidate Hillary Clinton won the state of Minnesota over Donald Trump by a narrow margin of 1.5 percent. After losing such a tight race, Trump has vowed to turn the state red in 2020. Minnesota last voted for a Republican in 1972 for Richard Nixon.

Both the Biden and Trump campaigns have frequented Minnesota in the months leading up to the election. Since early voting began on Sept. 18, Trump has visited the state three times and Biden has visited twice. Both candidates made stops in the state on Friday with Biden in St. Paul and Trump in Rochester.

Republican Donald Trump was elected in 2016 after defeating Clinton. Before running for office, Trump was known as a real estate mogul and the host of the reality television series ‘The Apprentice.’

In his first term, Trump appointed three U.S. Supreme Court justices, established the Space Force as the sixth branch of the military, made changes to the tax code and withdrew the United States from the Iran nuclear deal.

He was impeached last December after a formal House inquiry alleged he solicited foreign interference for his re-election by allegedly withholding military aid and a White House invitation to the president of Ukraine in order to influence Ukraine to investigate Biden. Trump was acquitted of the charges.

After campaigning in Duluth in September, Trump tested positive for COVID-19 and was hospitalized for several days before recovering and returning to the campaign trail. Trump has received criticism for his federal response to the pandemic.

From 1973 to 2009, Biden served as a U.S. senator for Delaware. Biden was the vice president for the United States for two terms during the Obama administration from 2009 to 2017. After one of his sons died, he chose not to run for office in 2016, but he decided to run for president in 2020.

As vice president, Biden helped create federal policies regarding Iraq and Afghanistan, became an advocate for gun control following the Newton shooting and helped created a bipartisan agreement to avoid a fiscal cliff crisis in 2013.

Biden has faced criticism for his part in the 1994 Crime Bill, which he largely wrote as then-chairman of the Senate Judiciary Committee. While the bill had bipartisan support at the time and has since been blamed for increasing mass incarceration in part to mandatory minimum sentencing. This year, Biden has said certain elements of the bill were a “mistake.”