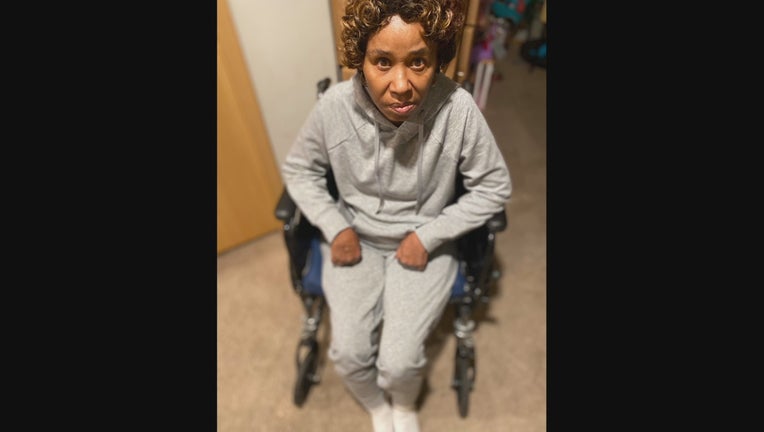 Carolyn Edwards was seriously injured in a hit-and-run crash in St. Paul, Minnesota on Dec. 1, 2020.

ST. PAUL, Minn. (FOX 9) - In the first 60 days of 2021 more than a dozen people have been hit by vehicles in St. Paul. Half of the cases were hit-and-runs, three of them were fatal, leaving families without answers.

"She was crossing over and someone hit her. A car hit her," said Sari Edwards, the daughter of a hit-and-run victim.

14 people struck by vehicles in St. Paul so far this year including 7 in hit-and-runs

In the first 60 days of 2021 more than a dozen people have been hit by vehicles in St. Paul. Half of the cases were hit-and-runs, three of them were fatal, leaving families without answers.

On Dec. 1, her 57-year-old mother Carolyn was hit by a van while crossing Rice St. near Milford St. in St. Paul.

"Witnesses say he got out the car to see if she was okay, but when he seen the state of her condition he go back in his car and fled," said Edwards. "And so he left her there to die."

Carolyn was seriously injured. She spent a month and a half in a coma. She is finally back living with Edwards, but needs 24/7 care on top of physical, occupational and speech therapy to re-learn how to walk and talk.

So far this year, 14 people have been hit by cars, vans or trucks in the City of St. Paul. Seven of those cases were hit-and-runs, three of which killed the victim.

"It’s a trend that we’re concerned about, it’s one we’re monitoring and it’s one we’re taking action to get in front of," said Steve Linders of the St. Paul Police Department.

St. Paul police say when the weather warms up, they tend to see more people out walking, which increases the chances of these kind of crashes.

"We think a lot of these crashes are due to distracted drivers," said Linders.

Now the Edwards family is one of many in St. Paul looking for answers. For them, that means finding the driver of a minivan that had rust spots and a missing hub cap. They are hoping they can get justice for the grandmother who is starting all over.

"All of these hit-and-runs going on in St. Paul, it’s ridiculous and it needs to be stopped," said Edwards. "It really needs to. Because y'all are hurting people’s loved ones. These are human beings you’re hitting and leaving for dead and it’s unacceptable."

The van police are looking for in Carolyn Edwards’ case is silver, is missing a hub cap and has distinct rust spots on the driver’s side door.

St. Paul police are sharing images of vehicles suspected to be involved in hit-and-runs on their Facebook page. They say a tip received on social media earlier this year led to an arrest.