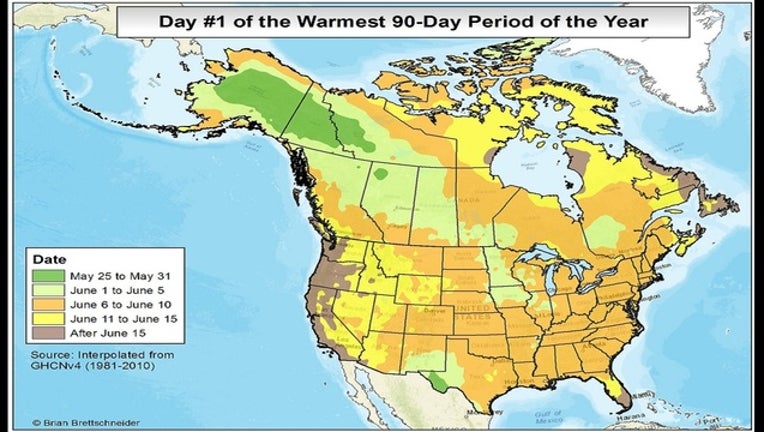 (KMSP) - It’s the season that many of us have been waiting for; sunshine, warm/hot and humid days, thunderstorms… all of the sights and sounds of summer.  Well it’s finally here, sort of. While the official start to summer is still about three weeks away, we have started meteorological summer. So what’s the difference?

Well “official” summer is the season that’s classified not by our weather pattern necessarily, but by Earth’s placement in its year long journey around the sun. It’s the time of year when the Northern Hemisphere experiences the most daylight it will see before the tilt of the Earth begins to take the “top” side of the Earth and face it away from the sun. Meteorological summer is tied to our month, so in effect, it’s a totally arbitrary value. It allows us to break up the different seasons into nice chunks that are exactly three months long. But as the map above describes, it also coincides a little better with the weather we are accustomed to experiencing in each season.

For example, the typical start of the warmest 90 day period for much of the state is in the first couple of days of June. This lines up much better with our “arbitrary” meteorological summer as opposed to the “actual” start of summer, which isn’t until at least the night of June 20. But, the same thing goes for every other season, like winter for example. Winter doesn’t technically begin until right before Christmas, around December 21.  But as most of us could attest to, the coldest 90 day period for the state typically starts during the last week of November or the first week of December right around the start to meteorological winter, which would be December 1. So, while it may be arbitrary, I think we can agree that it makes a little more sense. Regardless though, our warmest 90 day stretch starts now!