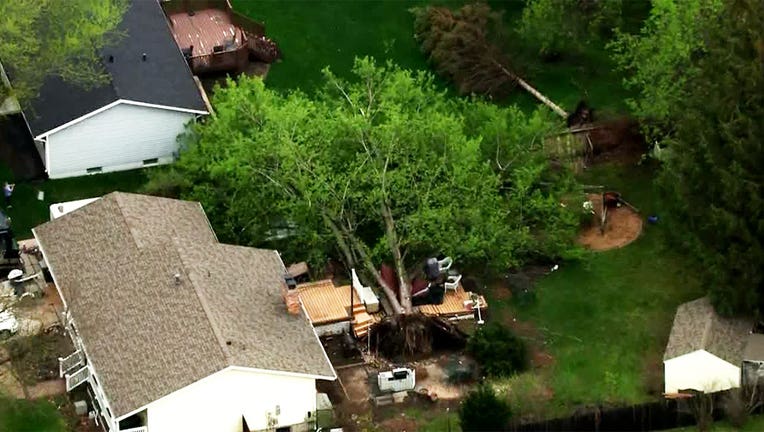 Aerial video shows fallen trees from the heavy winds in Coon Rapids, Minnesota on May 11, 2022. (FOX 9)

According to the National Weather Service survey crews, the tornado touched down shortly before 8:30 p.m. in a neighborhood off University Avenue, just south of Morningside Memorial Gardens cemetery.

Survey crews say it appears the tornado left a path of about three miles, with a width of about 50 yards and max winds of 80 mph.

There were multiple reports of damage across Coon Rapids as a result of Wednesday's storms. Our chopper spotted a tree down on the porch of a home. Our news crews also found a home that had been split in half by a large tree that came down during the storms.

Beyond tornadoes, much of the damage on Wednesday was caused by heavy straight-line winds that took down trees and power lines.

A house in Coon Rapids, Minnesota split in two after a tree was uprooted during Wednesday night's storm

Neighbors say the two people and five dogs who live in the home were in the basement when the tree fell on the house, adding that no people or dogs were injured.

It's looking like another stormy night for much of Minnesota Thursday. But if severe weather does develop, it's likely it will be a few hours later than the storms Wednesday night that knocked out power for thousands, downed trees and caused flooding across the Twin Cities metro.

Storms, which could be strong to severe, are expected to move into western Minnesota around sunset (7-9 p.m.) and reach the Twin Cities toward the midnight hour.