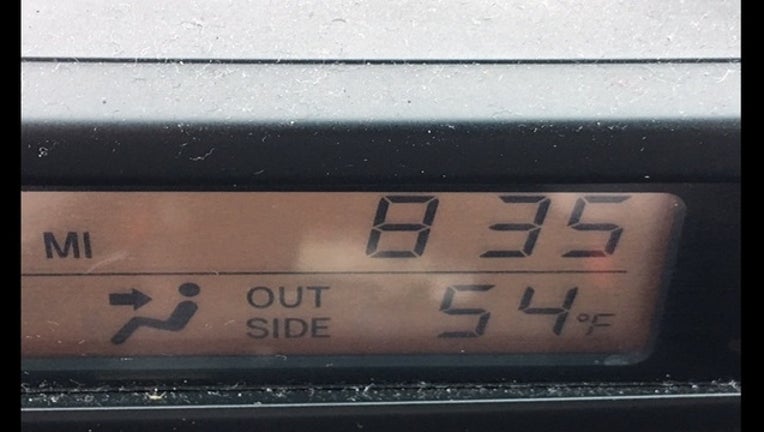 KMSP - You’re driving down the road, you look down toward your tachometer and see a temperature staring at you in the face. Your car says that it’s 90 degrees. While it’s certainly a convenient way to check the temperature, most of the time, it isn’t correct. It will likely be within a few degrees of the actual air temperature, but it’s rare when it is exactly right.

So why is it almost always wrong?

Technically, everything above absolute zero (the temperature at which molecules don’t move at all) is considered some form of heat.

The most common form of measuring temperature is with a mercury thermometer, where these molecules interact with the mercury, forcing it to expand and contract based off of how quickly they are impacting it. We use mercury because unlike most liquids found on Earth, it has a very low freezing point. But your car isn’t equipped with a thermometer to get that number to pop on your dashboard. It’s actually equipped with a thermistor.

A thermistor is a lot like a thermometer, but instead of using mercury, it measures the change in electrical current when interacting with the atmosphere. Thermistors are used in cars because they are easy to make, small, cheap, and not harmful when broken (mercury is poisonous).

For the most part, thermistors are fairly accurate, typically within a degree or two of the actual air temperature. But it’s WHERE the thermistors are located that’s the problem.

Almost every thermistor in a car is located behind the grill. This makes it easier for the thermistor to receive air, but in that position, it is compromised by 2 BIG factors. First off, it’s located close to the engine.  Almost every gas engine heats up above 200°F under normal conditions. This will send “artificial” heat toward the thermistor.  Second, it is also quite close to the road surface. Pavement absorbs, holds, and conducts heat far more efficiently than any natural surface on the earth, which means heat is being re-radiated up to your car and into the thermistor.

Just imagine walking barefoot on black top in the middle of the summer… yeah, exactly… you wouldn’t because you know it would be too hot.

Now, there are some good things about having a car thermometer as long as you know its limitations. It will always be the least accurate during sunny days because of how asphalt can radiate heat, but will be far more accurate on cloudy days, or at night when the sun is not present. That being said, it will likely always be a little too warm.

When you’re driving down the road in the cold season, it can certainly tell you when you should be on the lookout for ice. If your car says it’s 35 or 36, there are likely spots around that are at freezing (32 degrees), so use caution. It is also more efficient at higher speeds when higher wind can overwhelm any local condition from the asphalt or the car’s engine. On the contrary, it will be least accurate during stop and go traffic.

So while it is certainly a convenient way to get an idea of the temperature outside at any given time, just know that it has limitations. Oh, and don’t think your local meteorologists forecast is wrong when he/she predicted 90º but your car says 95… your car is probably the one that’s wrong J