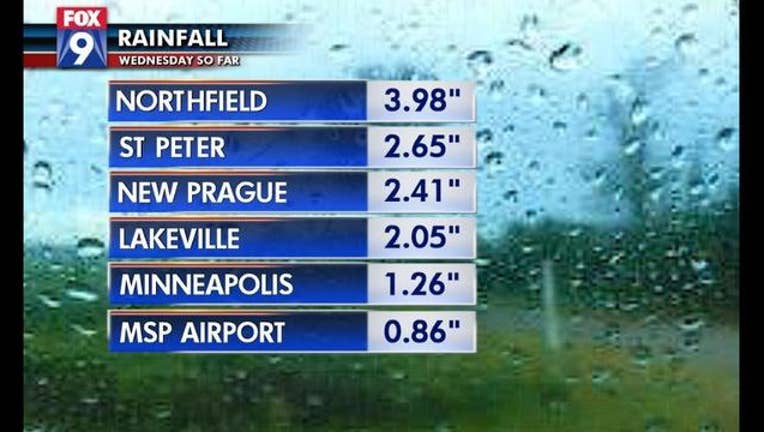 (FOX 9) - Parts of southern Minnesota were drenched with rainfall totals topping 2 to 4 inches in several counties on Wednesday.

As of Wednesday afternoon, Northfield had the most with nearly 4 inches of water.

St Peter, New Prague, Lakeville and several other locations from the south metro southward all managed to pass 2 inches.

Flash flood warnings were issued for several south metro counties for a good part of the late morning and early afternoon. The heavy rain even led to several mudslides that closed highway 169 near St Peter.

While most metro locations didn’t experience rain related issues, it was still a very wet day for many spots, with much of the metro core picking up anywhere from three quarters to an inch and a half of rain.

The heavy rain is winding down, but isolated to widely scattered showers are likely to hang around tonight and Thursday.

Stay up to date with the FOX 9 Weather App. It has the latest temperatures, forecasts and rain totals 24/7. Download it for Android or Apple.