HOUSTON - Nicholas has been downgraded to tropical depression as it continues crawling toward Louisiana after battering Southeast Texas with gusty winds and torrential rain.

Nicholas made landfall about 12:30 a.m. Tuesday on the eastern part of the Matagorda Peninsula, about 10 miles west-southwest of Sargent, as a Category 1 hurricane with maximum sustained winds of 75 mph.

As of 10 p.m. Tuesday, Nicholas had winds of 35 mph and was centered about 15 miles west-northwest of Port Arthur, Texas. It was crawling east-northeast at 6 mph.

The forecast calls for Nicholas to continue its slow pace to the east. The leftovers of the storm will then meander around Louisiana before dissipating.

The heaviest rains from Nicholas are also shifting east of the region. More than a foot of rain was reported in Galveston, but the National Weather Service said officials are working to verify that report. Other coastal locations, such as Deer Park and Sargent, reported more than 8 inches of rain. 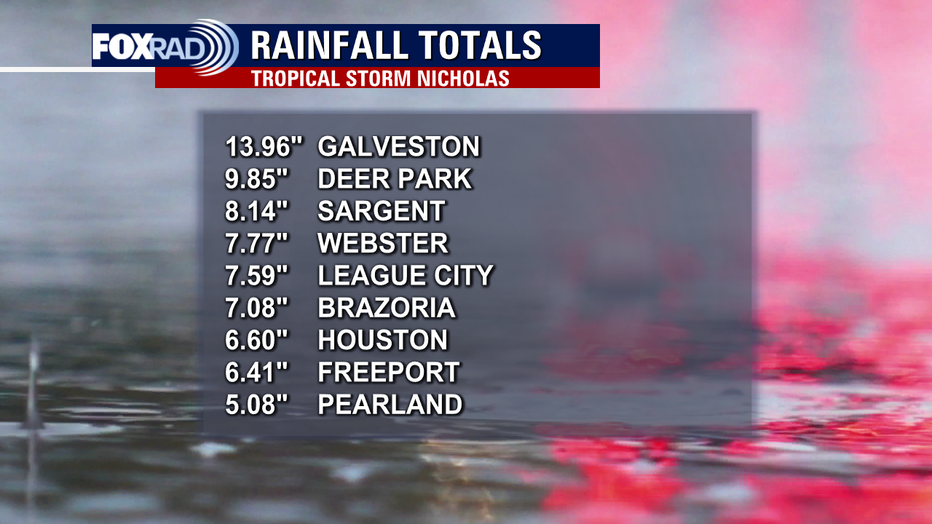 According to the Harris County Flood Control District, most channels were back in their banks by Tuesday afternoon.

MORE: Nicholas: Some Houston-area rivers, bayous and creeks out of their banks

Storm surge warnings for the Southeast Texas coast have been dropped. A surge of 3 to 5 feet above tide was reported in both Galveston and Matagorda bays as Nicholas moved ashore.

Forecasters also warned of dangerous rip currents along the beaches of Southeast Texas as Nicholas heads for Louisiana.

POWER OUTAGES IMPROVING BUT THOUSANDS STILL IN THE DARK

As the effects of Nicholas were felt in southeast Texas on Tuesday morning, hundreds of thousands of customers across the region were without power.

As of 10:45 p.m., over 115,000 customers were without power, and the most significant impact was to the company's southern and eastern service areas. An improvement over the nearly half-million customers without power Tuesday morning.

CenterPoint says they have begun their damage assessment and service restoration process.

Customers are asked to keep phone lines open for electric and natural gas emergency calls only. Estimated electric restoration times will be provided when assessments are completed.

MORE: More than 330K customers now without power due to Nicholas 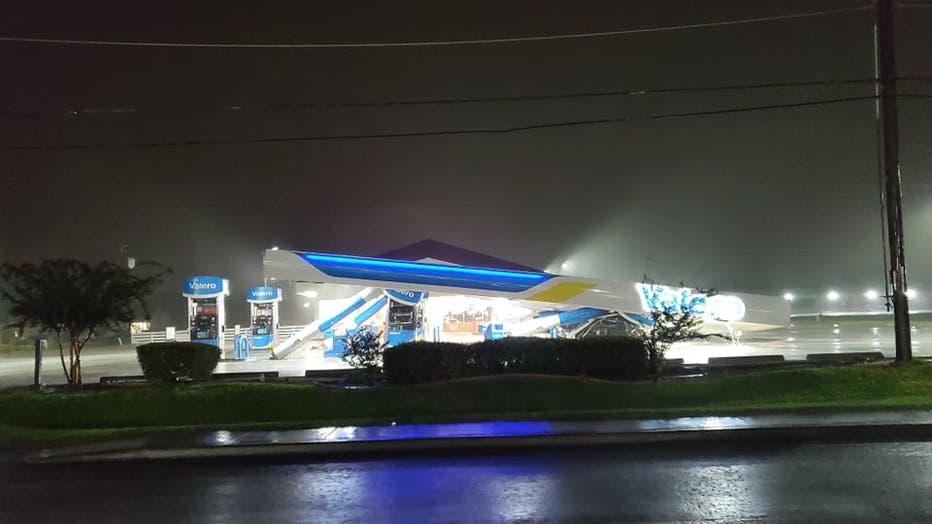 A gas station in Texas City is seen toppled over as Nicholas moves across the area. (Courtesy: Bobby McCammon)

Some school districts canceled classes on Monday and Tuesday. Some districts have also canceled for Wednesday. Click here for a list.

Businesses closed or reduced their hours, and Harry Styles postponed a Monday night concert in Houston.

Over the weekend, Texas Gov. Greg Abbott ordered state resources to be placed on standby along the length of the Texas Gulf Coast.

"We will continue to closely monitor this storm and take all necessary precautions to keep Texans safe," Abbott said in a statement. "I encourage Texans to follow the guidance and warnings of their local officials and be mindful of potential heavy rain and flooding."

We have the latest on road conditions in the Houston area. You can find that map below or click here.