(FOX 9) - After a beautiful day Saturday, we're heading into a more active afternoon to end our weekend.

A line of storms fired up into North Dakota early this morning, and has quickly moved East, prompting Severe Thunderstorm Warnings and watches as it does so. These storms are expected to stay North of the metro and taper heading into the lunchtime hour.

There have also been a few isolated storms in parts of Southern Minnesota Sunday morning. While these have not met the threshold for severe, there were still a few stronger cells that developed and are also continuing to wane as they move East.

Our attention then turns to what sets up this afternoon as a cold front will sweep through from the Northeast. This front will encounter the hot and humid air being ushered in from the South. As it does so, it will help that hot and humid air rise increasing the instability in our atmosphere. We should begin to see these storms fire up later this afternoon and push South and East moving closer toward the metro as we move to the late dinnertime hours and into Sunday night. 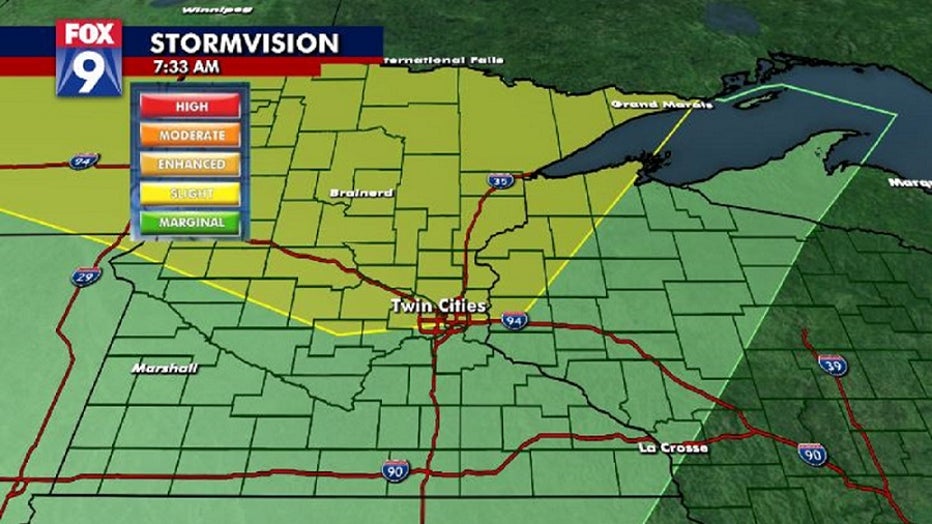 Threats with storms that may develop today are strong gusty winds in excess of 60+ Mph, large hail, and isolated tornado development.

Coupled with the storm threat, we're also headed into a hot and humid afternoon with temperatures climbing into the upper 80s and low 90s. Our heat index today will take us well into the 90s, some areas into the Southwest flirting with the triple digits.

Storms will push out late tonight, and into the early Monday morning hours.