Highs in the lower 80s for the Twin Cities on Friday with relatively low humidity.

(FOX 9) - It'll be glorious outside to kick off the start of the Fourth of July holiday weekend, but heat and humidity will increase as the weekend progresses.

The high on Friday will be in the low 80s for the Twin Cities (seasonable for this time of year), while it'll be slightly warmer in southern Minnesota and a bit cooler in northern Minnesota, where highs will be mostly in the 70s. There will also be plenty of sunshine and low humidity levels with northwest winds.

Overnight, things will cool off to around 61 degrees in the Twin Cities, while it'll dip into the 40s and 50s in northern Minnesota.

Saturday could see some passing cloud cover and the potential for stray showers in the morning. The afternoon will see highs around 81 degrees in the Twin Cities with partly cloudy sky, though an isolated thunderstorm is possible in the afternoon. The humidity will remain quite low.

The humidity kicks up a bit on Sunday, which will feel slightly muggy with dew points in the 60s and a high of 86 degrees. It'll be fairly sunny with an isolated rumble.

On Monday, which is the Fourth of July, the high will be 85 degrees but it'll feel like a tropical 90 degrees with high dew points. A couple of scattered storms are possible. 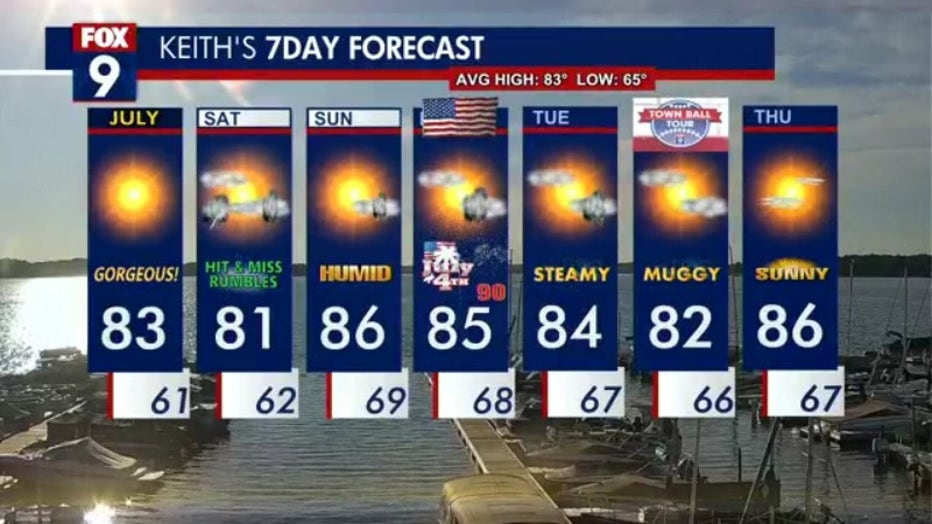 Here's your holiday weekend forecast, which includes the possibility for some showers.