(FOX 9) - We all know that the weather in Minnesota can be finicky. From 80 degrees one second, to a foot of snow the next. While differences from year to year are totally normal (we call it year to year variability), we can begin to see more specific trends over time. We call this climate.

Climate is essentially weather over a long period of time. Climate slowly evolves and changes over years, decades, centuries and millennia. That change is spurred by dozens of different variables from solar output, to the wobble of Earth’s tilt, to ocean currents, and potentially even humans. But not all days, weeks and months change at the same rate. Just because you have a well above average July this year doesn’t mean you will have another next year. But combining a bunch of years together, you can start to see trends. 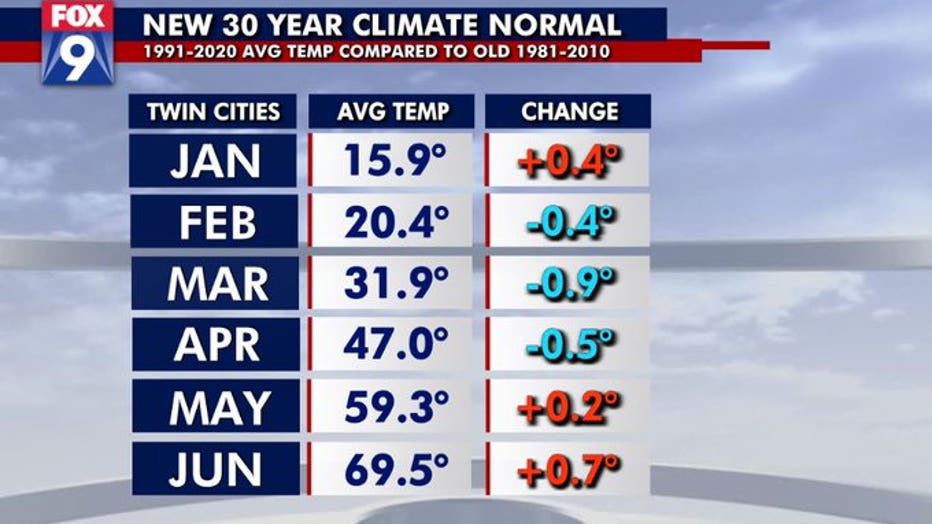 While climate can be congealed into many hundreds or thousands of years, the relevance of such a large period of weather to our lives is pretty much nonexistent. So, in order to determine what we classify as "normal" for any given day of the year, we use a 30-year period of data ending at the start of the current decade. For example, in 2020, we used 1981-2010 as our 30-year climate period. But now that we’ve started a new decade, we have adjusted. Now, we use the 1991-2020 climate period. The change between these two periods can give you a pretty large indication of what’s happening over longer periods of time.

Calculating our new climate normals shows that the Twin Cities has warmed roughly 0.4 degrees over the year as a whole, when comparing our old climate norms to the new one. But, just because our year as a whole is nearly half a degree warmer doesn’t mean every month is warming at the same rate.

In fact, when we break down our temperatures by month, our spring months are actually getting colder. March has seen the largest cooling over the last decade, now coming in nearly a degree cooler. That doesn’t sound like a lot, but seeing that much change by swapping out just a third of our climate stats is pretty significant. Both the months into and out of March have also seen some cooling. 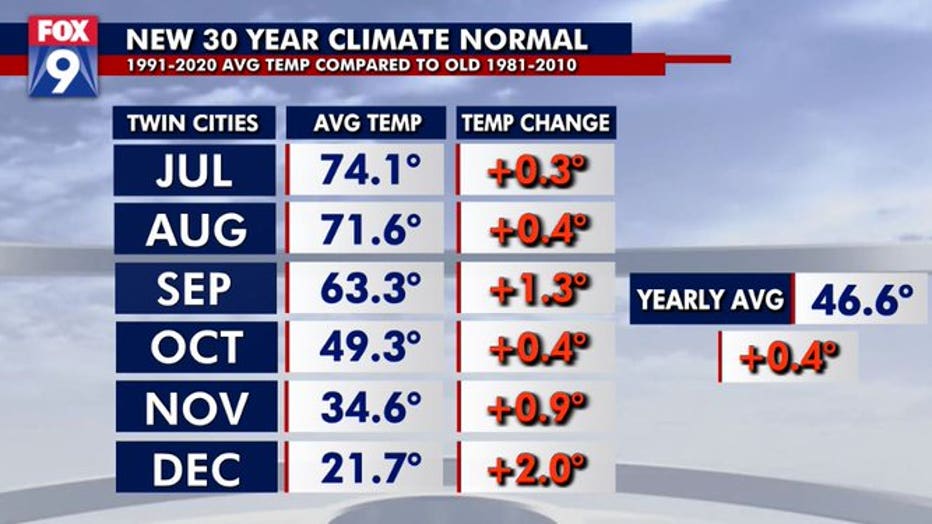 However the rest of the year is nearly stationary or warming to some degree. More specifically though, it’s those later in the year transition months that have seen the most change. Our transition from summer to fall appears to be starting later into September now, which has pushed the month up by 1.3 degrees. But it’s the transition into winter that has seen the most drastic change. December is now 2 degrees warmer than the previous 30-year average, which is a MASSIVE change.

What this can tell us is that it appears seasons maybe shifting slightly, getting shoved back further into the year. This may mean that the coldest time of year for us may no longer be the third week of January (when climate normals bottom out and start to rise), but maybe more like the first week of February. Because of this new two-week or so delay, traditional spring months have gotten colder, with much of the fall and early winter getting warmer. So, why the change?

Well, there’s no way to really know for sure. It may have to do with shifting decadal patterns in ocean currents, an unnoticed minute shift in Earth’s orbit, the influx of carbon dioxide into the atmosphere or a laundry list of other variables. What is a near certainty is that the planet is warming for one reason or another, and Minnesota’s very slight warming is the exception, not the rule. In fact, according to a climatologist out of Alaska, the Upper Midwest and south central Canada have seen some of the smallest warming on the planet over the last decade.  Many other parts of the U.S. have seen 2 degrees or more in warming in the last 10 years. Parts of Europe are over 3 degrees. The Arctic and Antarctic are 5 degrees warmer in spots. 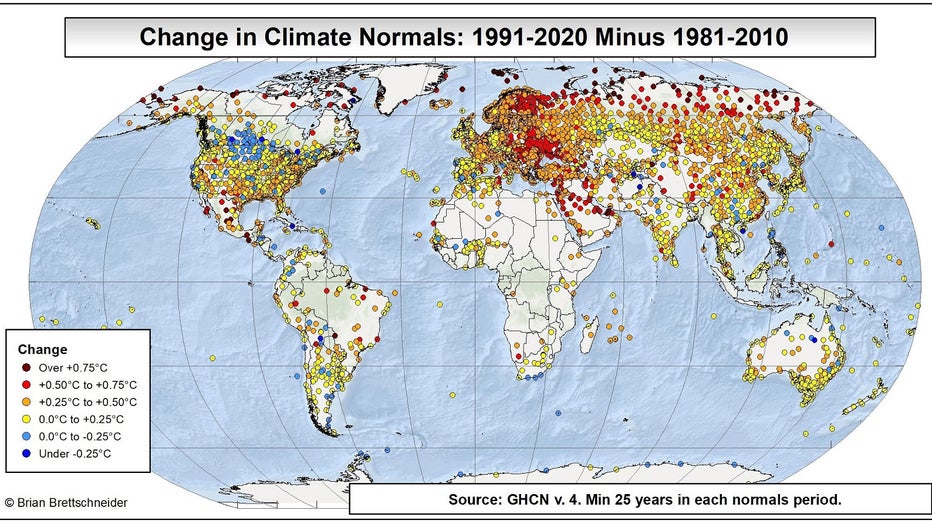 What’s ahead? Well, our warming doesn’t show any sign of stopping, at least not at the moment. There will certainly be plenty of hiccups ahead, with cooler than average days, weeks, and months…but there is no peer reviewed evidence to suggest that our warming will plateau anytime soon, even though it may fluctuate from year to year and decade to decade. 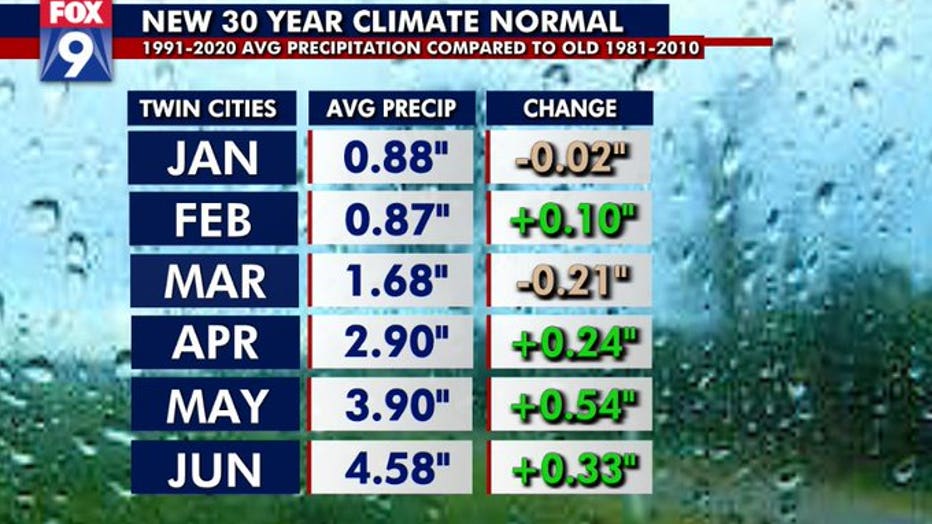 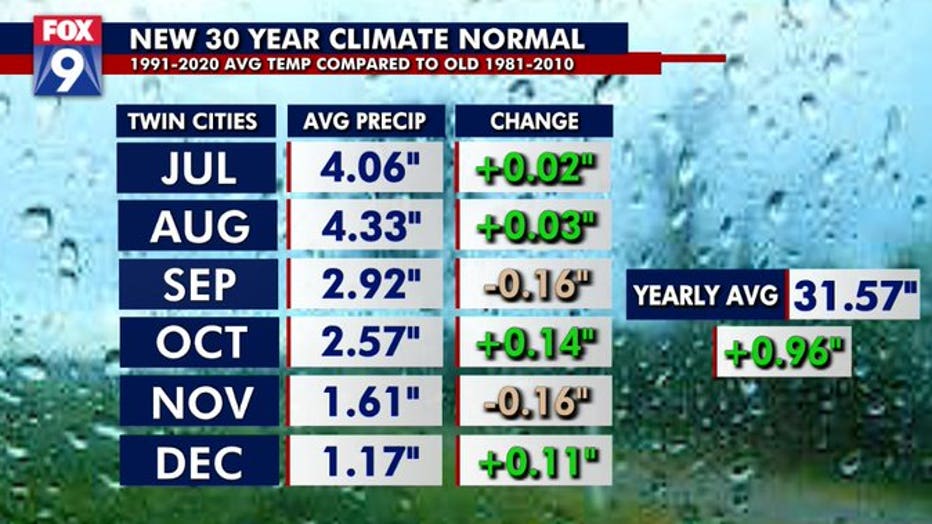 While temperatures usually get the headlines, precipitation totals have certainly changed over the last decade as well. Our yearly average precipitation is now about an inch higher through the year, now averaging more than 31 inches of liquid….which is about a 3% increase. 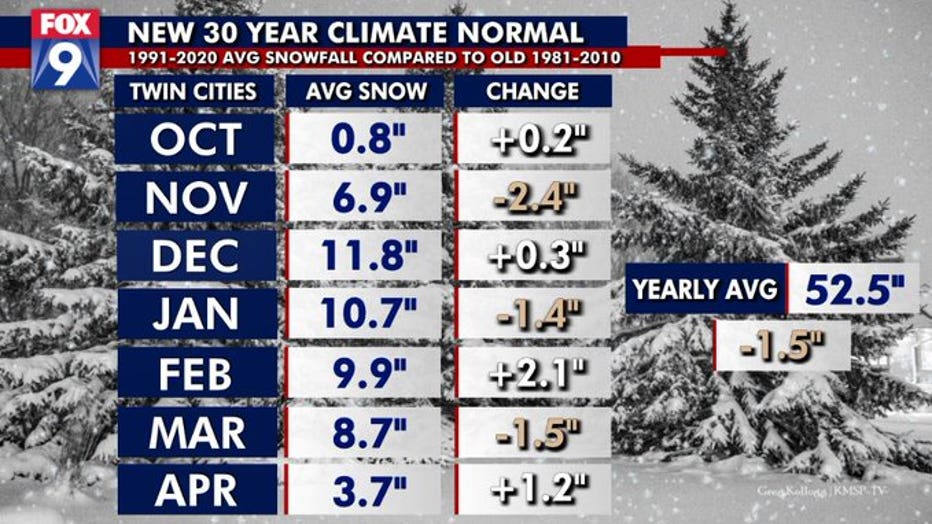 As for snowfall, it’s pretty flat, but officially down 1.5 inches on the year. The main component, however, isn’t so much how much snow we get during the year, but the change in WHEN we get it. Notice November has seen a huge drop in snowfall, down about 25%. BUT, February and April have seen HUGE gains. April is up over 40%, mostly because of our two HUGE April snowstorms in the last five years. On a side note, we can and have received snow in both September and May, but it’s rare enough that we don’t average more than a trace.

Stay up to date on the weather by downloading the FOX 9 Weather App. It has the latest temperatures, forecasts and school closings 24/7. Download it for Android or Apple.