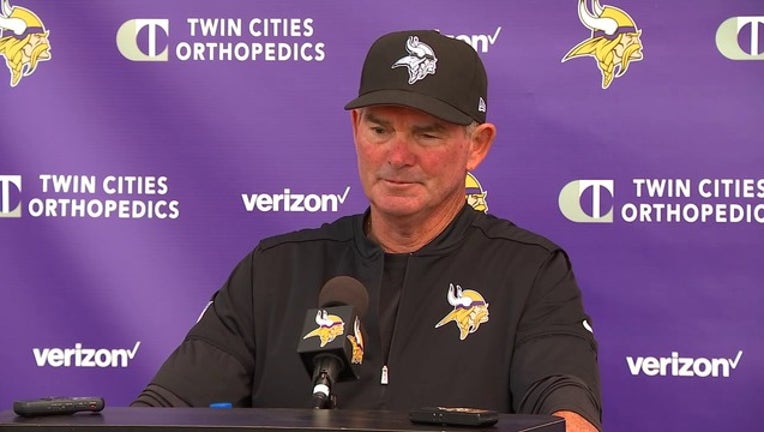 Cornerback Holton Hill was among the participants, but he won't be playing for at least the first eight games of the regular season. Hill was suspended four games back in April for violating the NFL's policy on performance-enhancing substances.

The Vikings learned late last week Hill was suspended another four games, eight total, after violating the league's substance abuse policy. He can practice and play in the preseason, but he's not eligible to return to the active roster until after the Vikings play the Washington Redskins.

Mike Zimmer was not pleased when asked about Hill on Friday.

"I really don't have much thoughts on it. Disappointed is not a good word for me," Zimmer said.

He is eligible, if he's still on the roster, to play when the Vikings travel to face the Kansas City Chiefs on Nov. 3. But there is no guarantee that will happen.

"We don't know if he's even going to make the team so we'll see how that goes," Zimmer said.

Hill provided depth in the secondary for the Vikings and shined towards the end of last season. He finished the season with 36 tackles, one interception and seven passes defended.

Zimmer also gave an update on cornerback Mike Hughes, who is starting Training Camp on the physically unable to perform list. Hughes continues to recover from knee surgery, and Zimmer said he suffered a "multi-ligament tear."

"He's ahead of schedule, he's doing great. So we'll just have to see how it goes. He's just not ready to practice yet," Zimmer said.

Tight end David Morgan and receiver Brandon Zylstra are also on the PUP list to start the season. Shamar Stephen and Tashawn Bower are on the active/non-football injury list.