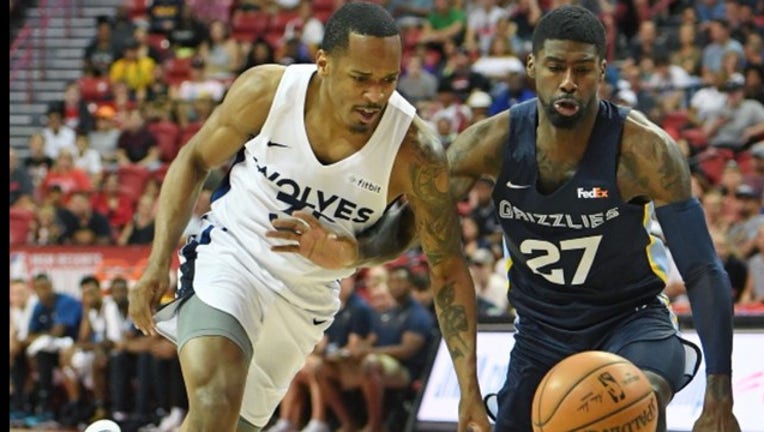 Barry Brown Jr. #35 of the Minnesota Timberwolves and Shaq Buchanan #27 of the Memphis Grizzlies chase a loose ball during the championship game of the 2019 NBA Summer League July 15, 2019 in Las Vegas, Nevada. (Photo by Ethan Miller/Getty Images)

MINNEAPOLIS (FOX 9) - The end result won’t carry any meaning, but there’s plenty for the Minnesota Timberwolves to take away from their experience in the NBA Summer League in Las Vegas.

The Wolves were the only undefeated team left in Las Vegas and faced the 5-1 Memphis Grizzlies Monday night for the Summer League title. Minnesota trailed 31-19 early and cut a 17-point second half deficit down to a single point on as many as six possessions. Trailing 95-92 with 0.7 seconds left, an inbounds pass headed to Keita Bates-Diop was tipped away by Grayson Allen, sealing the win for Memphis.

Bates-Diop had hit a shot from the perimeter seconds before to get the Wolves within 93-92 before the Grizzlies hit a pair of free throws. The Timberwolves were in the NBA Summer League title game for the second time in four years. Back in 2016, Ryan Saunders was the coach and Tyus Jones stood out in what ended up being an 84-82 loss in overtime to the Chicago Bulls.

Naz Reid had been the standout player for the Wolves during the Summer League, averaging 12.5 points and 4.7 rebounds in a little more than 18 minutes per game. Reid struggled Monday night, finishing with eight points on 3-of-13 shooting from the field in 20 minutes. The Wolves signed Reid to a two-way contract during Summer League action, meaning he'll spend a majority of his rookie year in the G League in Iowa.

Guard Kelan Martin led Minnesota with 19 points on 6-of-14 shooting, including 3-of-7 from the perimeter. All three of those makes came during a third quarter run that got the Wolves back within striking distance. He scored 11 straight points in the third quarter.

The Wolves played the entire Summer League without first round pick Jarrett Culver. He joined the team late in Las Vegas after the trade for his rights became official on July 6. He practiced and participated in team activities in Las Vegas, but the Wolves opted not to risk injury and didn’t play him in any games.

Minnesota was also without Josh Okogie and second round pick Jaylen Nowell for a majority of the Summer League. Each suffered injuries that were considered minor, and held out as a precaution.

There were several facets of the Wolves’ play in Las Vegas that should have fans excited for the team’s potential as it translates to their style with their star players. More than 80 percent of their shots through four games were either at the rim, or from behind the three-point line. Through the first four games in Las Vegas, the Wolves took a combined 17 midrange jumpers.

Over that same span, the Wolves were 13-of-26 on corner three-pointers. They played faster and cut down on long, midrange jumpers. Defensively, they allowed 79.8 points per game on average and limited opponents to 38.9 percent shooting.

The Wolves are now off until they come together for training camp.