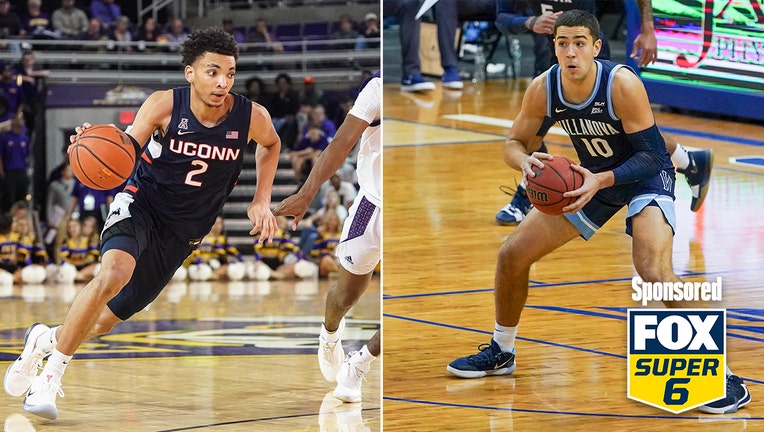 Back in the old days of the Big East, Villanova and Connecticut was a rivalry that had very few peers. Whether it was playing at the old Hartford Civic Center or the Spectrum in Philadelphia, the two would have legendary names on the bench in Jim Calhoun and Rollie Massimino.
There would be future NBA players on both rosters like Ray Allen and Kerry Kittles. There would also be the sense that when March rolled around, these were going to be two programs who would be heard from in the national championship hunt.

The rivalry will be renewed again on Saturday when the Huskies- back in the Big East after seven years in the American Athletic Conference-  travel to the Main Line to face Jay Wright’s 10th ranked Wildcats (1 p.m., FOX).

You can win money on the rivalry as well by playing FOX Super 6. Just answer the following six questions correctly and you could take home $1,000. Best of all, it’s free to play- just download the FOX Super 6 app on your phone or android device.

Which team will have the most bench points in the first half?
UConn or Villanova
One thing that Villanova is not is super deep off the bench in terms of scoring. Three players get regular minutes for the Wildcats on the bench- Cole Swider (6.3 points per game), Brandon Slater (3.9) and Eric Dixon (3.3) Dan Hurley’s Huskies has a more consistent presence off the bench in Tyler Polley, who averages 8.3 points a game and 20 minutes off the bench.

What will Villanova’s Field Goal percentage be for the game?
0-35, 36-40, 41-45, 46-50, 51-55 and 56%+
Part of the reason that Villanova can struggle on the defensive end is because they can score at the other side of the floor. They are shooting 46 percent from the outside and they have consistently won the game on the glass, allowing for more second chances when they do miss. UConn is more stingy, allowing teams to shoot just 41.7 percent from the floor.

How many points will Villanova score in the game?
0-65, 66-70, 71-75, 76-80, 81-85, 86+ points
Again, Villanova has been an elite program under Jay Wright because they are able to do the little things better by just enough. The Wildcats average 78.6 points a game overall. In their 16 games to this point, Villanova’s lowest scoring game was a 59 point effort against St. John’s where they shot just 32 percent and their best performance was 98 against Marquette on Feb. 10.

Pick the team to win and by how many points
UConn by 1-3, UConn by 4-7, UConn by 8+, Villanova by 1-3, Villanova by 4-7, Villanova by 8+
By all accounts, Connecticut is on the bubble and has the greatest sense of urgency here. A win over Villanova on the road would give the Huskies a good chance- barring a collapse- to make the NCAA Tournament. The problem is Villanova is just so good at Finneran Pavilion – 6-0 this year, 173-25 since the 2000-01 season- and the Wildcats need this in a different way for getting their game together for a big March push.