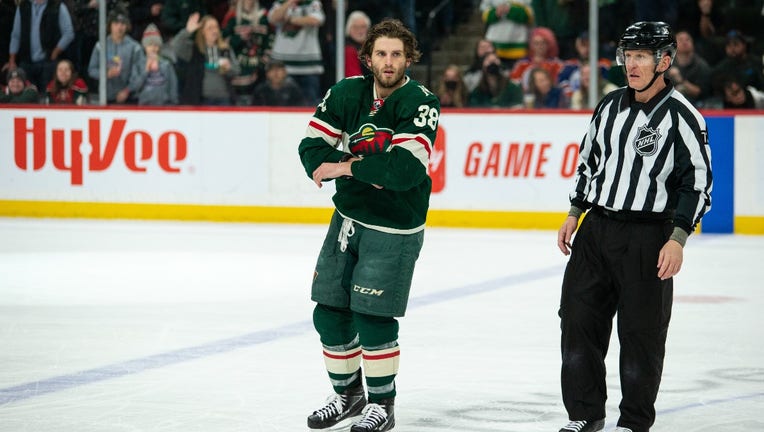 Minnesota Wild Center Ryan Hartman (38) skates off the ice after getting a major penalty during the NHL game between the Edmonton Oilers and the Minnesota Wild on April 12th, 2022, at Xcel Energy Center in St. Paul, MN. ((Photo by Bailey Hillesheim/Icon Sportswire via Getty Images))

MINNEAPOLIS - Minnesota Wild winger Ryan Hartman was fined $4,250 by NHL Player Safety on Wednesday for unsportsmanlike conduct against the Edmonton Oilers Tuesday night, and he’s more than happy to pay it.

Hartman got into a fight with Evander Kane, who went after Kirill Kaprizov during the third period of the Wild’s 5-1 win over the Oilers. As the two were being escorted by referees to their separate penalty boxes, Hartman was seen giving Kane the middle finger and yelling "F*** you!" at him.

The fine is the maximum allowable under the NHL’s collective bargaining agreement. Soon after learning of the fine, Wild fans began sending Hartman money via Venmo to help pay for it. Hartman said after beating the Oilers whatever the fine was, "it was well worth it."

"He gave Kirill a shot from behind in a very vulnerable spot. It goes to show we had five guys in there. They didn't have one guy in there to help him."

Hartman posted to social media Thursday that he's "overwhelmed" by the money he's received. He says he'll pay the fine with his own money, and any donations until 7 p.m. Friday will be sent to Children's Minnesota. Hartman said after morning skate on Thursday he's received more than $7,000 in Venmo payments, all of which will be donated.

"They’re great, wasn’t really expecting it but I think as a team we’ve been behind each other all year and the fans are also behind us in that aspect. We’re all a part of this together so it was a pretty crazy day," Hartman said. "Something I've never seen, something I wasn't really expecting. I've been fined a few times in my career and it's the first time we've had a fan base try to help pay it off for me."

One of the contributors? Anna Kane, Evander’s ex-wife. She gave Hartman $200.

Evander Kane has been the subject of recent controversy. He was accused of gambling on NHL games, and declared bankruptcy before the 2020-21 season. He was also suspended 21 games at the start of this season for trying to pass a fake COVID-19 vaccine card. Kane also went through a very public divorce, where allegations were made on both sides of domestic abuse. He’s also accused of offering her $2 million to abort their pregnancy.