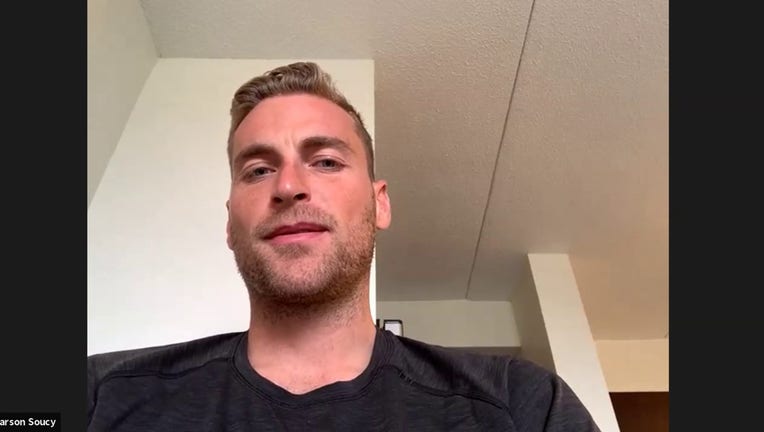 Wild defenseman Carson Soucy spoke Tuesday about being back on the ice at TRIA Rink for the first time in more than three months due to the Covid-19 pandemic.

MINNEAPOLIS - Carson Soucy had just been cleared to get back on the ice, recovering from an upper body injury in late February, when his comeback was stopped because of a global health crisis.

Soucy scored his seventh goal of the season in the Wild’s 5-3 win at Edmonton on Feb. 21, then would be sidelined for more than two weeks with a wrist injury. The Wild, one game out of a playoff spot with 13 games to play, was supposed to host the Vegas Golden Knights when the NHL suspended play due to the Covid-19 pandemic.

For the first time in more than three months, Soucy entered the Wild’s practice facility and got back on the ice. It was different, but it felt like home.

“It’s felt like a long time, especially when you’re not even able to skate. It was exciting just to be skating back in Minnesota with a couple of the guys,” Soucy told reporters on Tuesday via Zoom. “It made it feel more real, too. It made it feel like playoffs are coming and we’re going to start getting ready here.”

The Wild started small-group sessions, both on and off the ice, at TRIA Rink last week. As more players start to return to the Twin Cities, they’ll get tested for Covid-19 in the hopes that a training camp can start as early as July 10.

The NHL has not set an official date for returning to play, but the Wild will face the Vancouver Canucks in a best-of-five series to advance to the playoffs at a hub city that’s yet to be determined. We only know Minneapolis/St. Paul was recently eliminated.

Soucy expects the intensity at practice to ramp up once more players arrive and get on the ice.

“We’re going to have a good couple week training camp, I think we’re going to jump and it’s going to be really intense playoff hockey. That’s all you can hope for is that it’s intense, and hopefully we’re ready to bring our best at that time,” Soucy said.

The Wild won’t have much of a choice but to bring the intensity from the opening puck drop. With playing a five-game series once the NHL restarts, getting off to a slow start won’t leave them much time to recover.

Soucy, who had seven goals and seven assists in 55 games before the NHL suspended play, says there’s not much other option than to enter training camp with a sense of urgency.

“We’re going to probably do as many scrimmages as we can, trying to get into game shape and game ready, get the systems down and stuff. There’s not much room for error, so we’ve got be at our best right away,” Soucy said.

As sports begin to return across the globe, more positive Covid-19 tests among athletes and team staff are being made public. Soucy has concerns, like any athlete, about getting Covid-19. But he’s confident that he and the rest of his teammates can stay safe if they adhere to the guidelines.

He’s going to play if given the opportunity, but there has been talk among players about what the next steps are if Wild players test positive.

“It’s there, I mean it’s a question we ask ourselves what happens when we’re playing and then there’s a virus that goes through our team, but at the same time, we’re trying to do everything we can to prevent that,” Soucy said. “We’ve got to hope for the best and prepare like it’s not going to go through our team and we’re going to have a playoff run here.”

Soucy says he’s just fine with being quarantined at a hotel in a hub city with his teammates if it means the Wild is making a playoff run.

“Everyone knows kind of what’s at stake here, how short it could be if we’re not playing our best,” Soucy said.