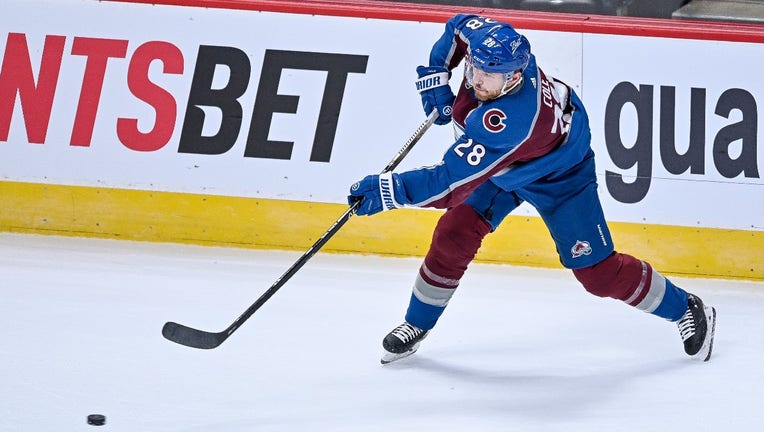 Colorado Avalanche defenseman Ian Cole (28) shoots during a game between the St. Louis Blues and the Colorado Avalanche at Ball Arena in Denver, Colorado on January 13, 2021. ((Photo by Dustin Bradford/Icon Sportswire via Getty Images))

MINNEAPOLIS - The Minnesota Wild is only three games into its season, but it’s not stopping General Manager Bill Guerin from shuffling up the roster.

Team officials announced Tuesday they’ve traded defenseman Greg Pateryn to the Colorado Avalanche in exchange for defenseman Ian Cole. Pateryn was fined $5,000 by the NHL earlier in the day for a cross checking penalty in the first period of Monday night’s 1-0 loss at the Anaheim Ducks.

Guerin told reporters Tuesday afternoon the deal came about quickly, with the Avalanche just a few hours away in Los Angeles to face the Kings. Cole is traveling to Anaheim Tuesday night and is expected to play Wednesday against the Ducks.

Cole will wear No. 28 for the Wild, and it's a roster shakeup less than a week into the season.

"You can always get better. Even though we’re strong, there’s always the possibility of getting better and adding a guy that’s won Stanley Cups is never a bad thing. Ian also has a great confidence and he’s got a swagger about him, and that’s something that I like. If there’s an opportunity to make your team better, it doesn’t matter if it’s Christmas Day or in the middle of the summer. If the time is right, then you’ll do it," Guerin said.

Guerin said he's a skilled defenseman who is aggressive in front of his own net. He'll join a defensive corps that includes Ryan Suter, Jared Spurgeon, Matt Dumba and Jonas Brodine among others.

"I think it’s important to have guys that have got that experience. I think they can share their own personal experiences with the organization. It is a different experience, and it’s one that if we have guys that have been there before and have accomplished that, it can only help. Ian was an integral part of those wins," Guerin said.