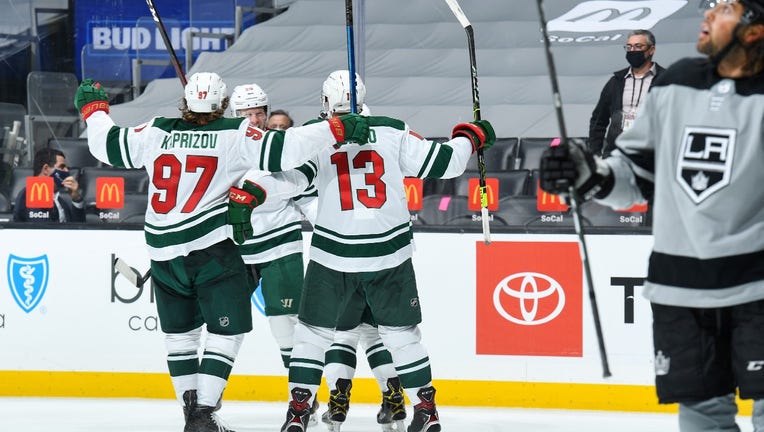 Ryan Suter #20 of the Minnesota Wild celebrate his goal with teammates during the third period against the Los Angeles Kings at STAPLES Center on January 16, 2021 in Los Angeles, California. ((Photo by Andrew D. Bernstein/NHLI via Getty Images))

MINNEAPOLIS - We’re only two games into the National Hockey League season, but we can already call the Minnesota Wild the cardiac kids.

Let’s just hope they don’t give fans high blood pressure the rest of the season. For the second straight game, the Wild got a late goal to force overtime, then scored the game-winner to beat the L.A. Kings 4-3 in overtime and leave Los Angeles with four points. They’re off to a pivotal 2-0 start in a shortened 56-game season.

They’ll take the victory, but would prefer to avoid overtime if they could.

"For the most part we competed our butts off and the guys had a really good feeling. They believed going into the third period, and that’s certainly a positive thing. Two games in and if you have that good feeling, hopefully it translates earlier more nights," Wild coach Dean Evason said after Saturday’s win.

Matt Dumba and Ryan Suter were the first heroes in Saturday night’s win. Suter raced for a loose puck with just a few seconds to play and the Wild trailing 3-2. He fired a shot on net with about two seconds left, and Dumba tipped it in with 0.3 seconds to play to force overtime. It was Dumba’s second goal of the night after he gave Minnesota a 1-0 lead in the first period.

"It felt great obviously to tie it up with under a second left is always good. We didn’t like where we were at the start of the third, but we knew what happened the game before and we thought if we stay with it, you never know," Suter said.

Playing 3-on-3 in overtime, rookie Kirill Kaprizov fed Marcus Johansson for a one-timer. Johannson partially fanned on the shot, but lofted it over Jonathan Quick for the goal. Kaprizov was named the NHL’s First Star of the Week on Monday after four points in his first two games, including the game-winning goal in his NHL debut.

It wasn’t the prettiest of wins Saturday night, coming back from down 3-1 in the third period for the second straight game, but the Wild will take any points they can get.

"Every point matters, every win matters. It’s going to be a tight race and I think getting off to a good start and getting some confidence and showing each other that we can win and what we’re doing is right, that’s huge for us. We’ll take that," Johansson said.

They don’t want it to become a habit, the Wild is the first team in NHL history to win their first two games by overcoming multi-goal deficits in the third period.

The Wild is in Anaheim to face the Ducks Monday night.