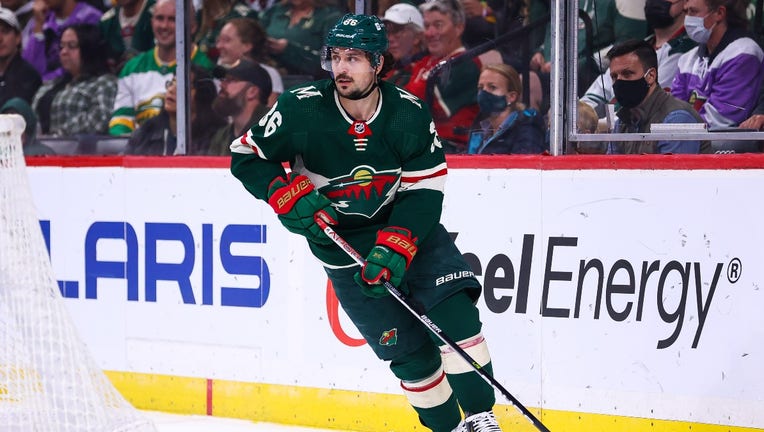 Mats Zuccarello #36 of the Minnesota Wild during the game against the Winnipeg Jets at Xcel Energy Center on October 19, 2021 in St Paul, Minnesota.  ((Photo by Harrison Barden/Getty Images))

Zuccarello leads the Wild in scoring with seven points, including three goals, through six games. Zuccarello had a goal in Tuesday night’s 3-2 win at the Vancover Canucks. Pitlick assisted on Matt Dumba’s goal that gave the Wild a 3-1 lead in the third period.

Both players reportedly tested positive for COVID-19 on Wednesday, causing the team to cancel its practice on Wednesday. The team is still scheduled to have its pregame skate Thursday afternoon before facing the Seattle Kraken.

Wild officials announced before the regular season that the team is 100 percent vaccinated for COVID-19. NHL protocols state players who test positive must isolate immediately, while an additional test to confirm the positive is conducted. If that test comes out negative, players have to test negative twice more in a 48-hour span to exit isolation. Players who are confirmed positive must isolate for at least 10 days.

That means the Wild is likely without Zuccarello and Pitlick for the next two weeks. In their absence, the Wild has recalled forwards Connor Dewar and Kyle Rau, and defenseman Jon Lizotte from the Iowa Wild. Dewar has four points, two goals and two assists, in four games with Iowa. Rau has five points in four games with the Iowa Wild this season, and recorded two assists in 14 games with the Minnesota Wild last season.

Three assistant coaches did not make the road trip after entering the NHL’s COVID-19 protocols. The Wild’s road trip concludes Saturday at Colorado.