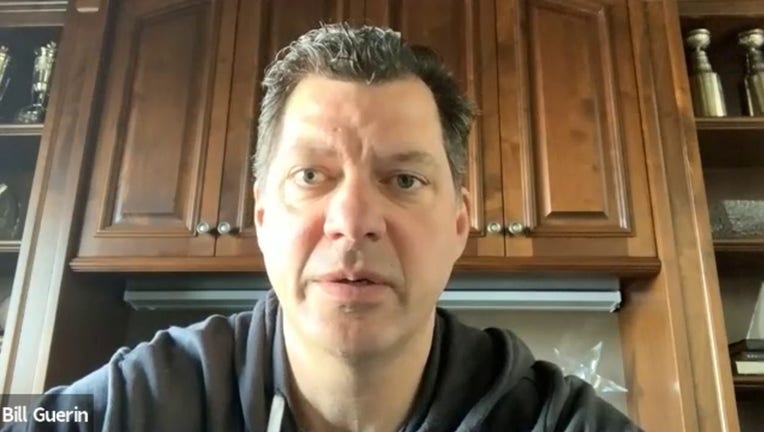 Minnesota Wild GM Bill Guerin spoke with reporters Monday about the team's season being on pause due to COVID-19 issues.

MINNEAPOLIS - Bill Guerin doesn’t yet know when the Minnesota Wild will take the ice next, but we now know it won't be for at least another week.

The NHL put the Wild’s season on pause late last week after five players, in addition to Marcus Foligno, were placed on the league’s COVID-19 Protocol List. The designation is for players who have either tested positive, or come in contact with a carrier.

The Wild also has one staff member who is on the COVID-19 list.

Minnesota’s two-game home series against the Arizona Coyotes was postponed, as was Tuesday’s game against the Blues. With their immediate future in limbo, Guerin had a call with the NHL Monday afternoon to determine the next steps going forward. He told reporters Monday he expects more positive tests among the team in the coming days.

League officials announced Monday afternoon with the Wild's COVID-19 situation, their games against the St. Louis Blues on Thursday and at the L.A. Kings on Saturday have been postponed. Their next scheduled game is Feb. 16 in L.A.

The Wild would have to call up several Iowa Wild players to make a roster to play Thursday, which would create a messy situation with the team’s salary cap. Team facilities remain shut down, and while Guerin said TRIA Rink could open as early as Wednesday, he didn’t sound optimistic.

The Wild isn’t the first NHL team to be hit by COVID-19 and it won’t be the last. Even Guerin’s own kids, a son in junior hockey and a daughter in college lacrosse, have dealt with COVID-19 and had it spread among their teams.

In the Wild’s case, the COVID-19 situation might get worse before it gets better. Guerin said the players who have tested positive have experienced minor symptoms. Body aches, loss of taste and sense of smell. Guerin said the Wild as followed strict protocols since before training camp, but sometimes things just happen.

"I really don’t think there was much we could’ve done. We just have to be patient and ride it out. I think that the most important thing is that people get to the other side of this healthy and we’ll resume playing hockey when it’s safe to do so," Guerin said. "It stinks, there’s no other way to put it."

The Wild is currently fifth in the Honda West at 12 points with a 6-5 record. They’re tentatively scheduled to head to L.A. next weekend.