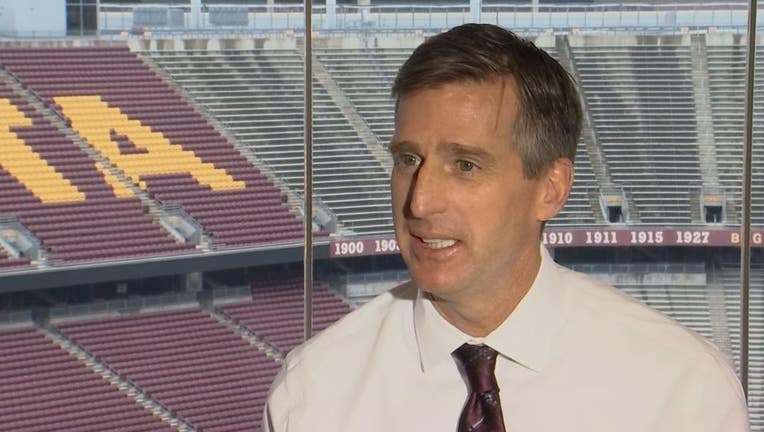 MINNEAPOLIS - University of Minnesota Athletic Director Mark Coyle is one of the best in the Big Ten, according to national experts in college athletics.

Jeff Goodman and Brett McMurphy, national experts in college basketball and football, have Coyle ranked No. 3 in the Big Ten. He’s behind only Gene Smith of Ohio State, and Barry Alvarez of Wisconsin. Coyle received an A- grade, based largely on football and men's basketball coaches at the member schools.

Coyle hasn’t wasted any time in making his imprint on the Gophers’ athletic department. His first big hire three years ago was football coach P.J. Fleck, after firing Tracy Claeys following a near boycott of a bowl game after a sexual assault scandal in 2016. Coyle hired Fleck after a 13-1 season at Western Michigan, and the Gophers are now coming off their best season since 1904. Minnesota finished 11-2, beating Auburn in the Outback Bowl, and won seven Big Ten games for the first time in program history.

The Gophers finished ranked in the top 10 in the Associated Press poll for the first time in 58 years.

Coyle also hired former Gophers great Lindsay Whalen to run the women’s basketball program. Whalen led Minnesota to its only NCAA Final Four appearance in 2004. Minnesota went 21-11 in Whalen’s first season as a Division I coach, and a first round win in the WNIT. The Gophers finished 16-15 last season.

With Hugh McCutcheon in charge of the Minnesota volleyball program, the Gophers are coming off a run to the NCAA Final Four and have the No. 1 recruiting class in the nation for 2020.

Coyle has also faced tough decisions within his own department as it faces financial concerns due to the Coronavirus pandemic. Coyle and the departments five highest-paid head coaches, Fleck, men's basketball coach Richard Pitino, Whalen, men's hockey coach Bob Motzko and McCutcheon are all taking a voluntary reduction in salary for the first six months of the next fiscal year, which starts July 1.

Minnesota faces a potential $70 million loss in revenue, depending on what happens with fall sports due to the Covid-19 pandemic. Football players are expected to be back on campus as early as the end of this week to start voluntary individual workouts. Basketball players will follow soon after that.