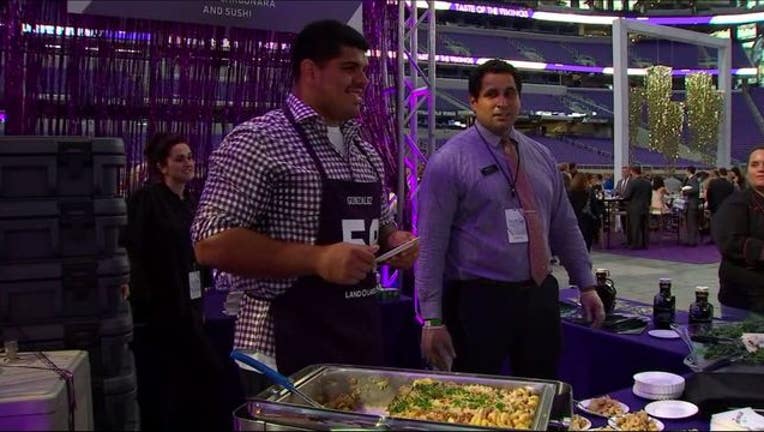 MINNEAPOLIS (KMSP) - Normally at U.S. Bank Stadium, you’ll see Vikings players getting after it on the football field, but at Tuesday night’s Taste of the Vikings event, the players entertained the fans in a different way by serving up some of the best food Minneapolis has to offer.

Fans lined up for food, autographs and silent auctions with all of the proceeds going toward the Minnesota Vikings Foundation, which helps advance the well-being of youth through engaging health and education initiatives.

“I think they get a chance to see what type of team we have, what type of players we have on the roster, not only good football players, but great people,” said Vikings General Manager Rick Spielman.

“It’s amazing, awesome all the players and meeting everybody, it’s awesome,” said Alisha Johnson, a fan.

The fans may have been excited to meet some of their favorites, but for one Vikings player, seeing the stadium where he’ll be starting his NFL career was a different kind of dream come true.

“This is actually my first time in the stadium,” said rookie offensive tackle Brian O’Neill. “It’s unbelievable, had to do a couple double takes, so it’s been awesome. People have been great tonight. The food’s been awesome, so it’s a good time.”