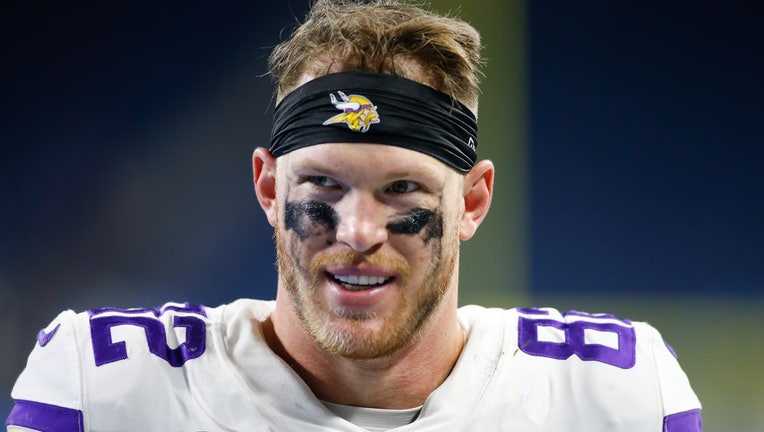 MINNEAPOLIS - Kyle Rudolph’s run with the Minnesota Vikings is over after 10 seasons.

In a move that came with little surprise, the Vikings announced on Tuesday they have waived the veteran tight end. Rudolph was due to make $7.6 million in base salary in 2021, and the move creates about $5 million in cap space. His salary for 2020 was to become guaranteed on March 20, forcing the Vikings to make a decision.

Rudolph made it clear earlier this off-season that he wasn’t going to take a pay cut to stay in Minnesota. Rudolph battled a foot injury in 2020 and played in 12 games, finishing with 28 catches for 334 yards and one touchdown. The receptions were the third-lowest of his career, and the one score is the fewest in one season.

Rudolph was a fan-favorite and one of the longest-tenured players for the Vikings. He was also one of the most respected players in the locker room.

Rudolph bid farewell to Minnesota on Tuesday in an article in the Players’ Tribune.

"Thank you Minnesota!! Although my time as a Viking has come to a close, my time as a MINNESOTAN is just getting started," Rudolph said.

"From the moment we drafted Kyle as a young man out of Notre Dame in 2011, through his 10th season with the Vikings in 2020, he has been one of the premier tight ends in the NFL and most influential and positive leaders I’ve ever been around. Kyle and Jordan have made such an immeasurable impact on our team and community that may never be matched. The energy they have invested in the community, most notably through the End Zone at the University of Minnesota Masonic Children’s Hospital, is truly remarkable. I admire Kyle and we will miss him and his family. We sincerely wish them the best," Vikings GM Rick Spielman said in a statement.

One of Rudolph’s best seasons with the Vikings came in 2017. He had 57 catches for 532 yards and eight touchdowns on the way to a Pro Bowl selection. He was also a Pro Bowl pick in 2012, when he had 53 catches for 493 yards and a career-high nine touchdowns in just his second season.

Rudolph also caught the game-winning touchdown from Kirk Cousins in the Vikings’ playoff win at New Orleans in 2020. Rudolph has also been as active as any Minnesota athlete in local charity. He’s done extensive work at the University of Minnesota Masonic Children’s Hospital.

"Kyle has been a leader and mentor for us on and off the field from the first day I arrived in Minnesota. He has been such an important part of this team and community throughout his career and it has been an honor to coach him the last seven seasons. He will be missed, and we wish him and his family nothing but the best," Vikings coach Mike Zimmer said in a statement.

With Rudolph out, Irv Smith Jr. and Tyler Conkin will take over the tight end duties for the Vikings in 2021. Smith had 30 catches for 365 yards and five touchdowns. Conklin had 19 catches for 194 yards and one touchdown.