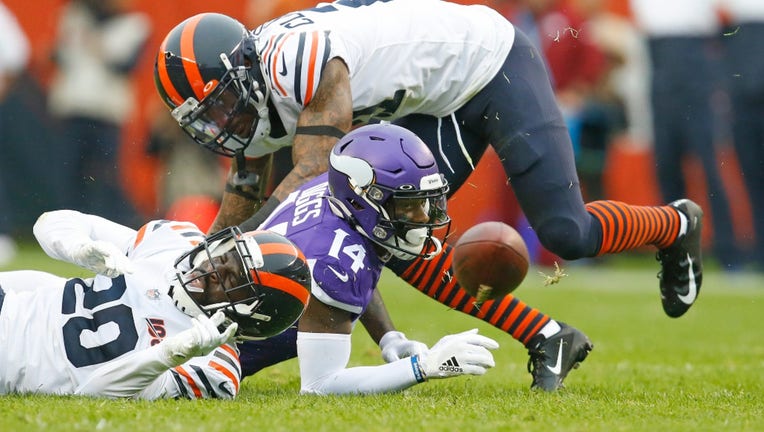 Ha Ha Clinton-Dix #21 of the Chicago Bears and Prince Amukamara #20 force Stefon Diggs #14 of the Minnesota Vikings to fumble during the first half at Soldier Field on September 29, 2019 in Chicago, Illinois. ((Photo by Nuccio DiNuzzo/Getty Images))

MINNEAPOLIS - The Minnesota Vikings fell to 2-2 on the season, and more importantly, 0-2 in the NFC North Division after a 16-6 loss to the Chicago Bears at Soldier Field on Sunday.

The Bears’ defense, one of the best in the NFL, suffocated the Vikings’ run game all day despite being without Akiem Hicks and Roquan Smith. The Bears limited the Vikings to 14 first downs and 222 total yards, just 40 rushing. The Vikings came into the game with the No. 2 rushing offense in the NFL, averaging 193 yards per game and more than five yards per carry.

The Bears sacked quarterback Kirk Cousins six times, and Cousins also fumbled twice. The Vikings couldn’t take advantage of knocking Bears’ starting quarterback Mitchell Trubisky out of the game early. He injured his non-throwing shoulder after a sack by Danielle Hunter on the game’s opening drive, and was quickly ruled out for the game. The Vikings thought they had a turnover on the play, as Everson Griffen recovered Trubisky’s fumble on Hunter’s sack, but the play was negated after Anthony Harris was flagged for defensive holding.

Chase Daniel took over and led the Bears on a 14-play, 75-yard scoring drive capped by a touchdown pass to Tarik Cohen. Daniel finished the day 22-of-30 passing for 195 yards and the score. The Vikings had trouble generating pressure on Daniel most of the game, though Shamar Stephen did get a sack in the second half.

The Bears added a field goal after a Vikings’ turnover to take a 10-0 lead at the half. Cousins hit Stefon Diggs on a short completion, but Diggs fumbled and the Bears recovered. The play was initially ruled an incomplete pass and overturned after a review.

Frustrations hit a new level with a game management issue before the end of the first half. With the Bears facing a 4th-and-3 and likely taking a delay of game penalty before punting, Mike Zimmer took a timeout after it appeared 12 Vikings were on the field, mixed up in personnel between defense and the punt return unit. The Bears brought their offense back on the field, and Daniel hit Anthony Miller for five yards and a fresh set of downs. The Bears took advantage of the new life with a field goal before the end of the half. Zimmer took the blame for the timeout after the game.

The Vikings managed just 59 total yards in the first two quarters, and didn’t take advantage of seven Chicago penalties for 50 yards in the opening half. Cousins also had Adam Thielen open deep in the first quarter for a play that could have gone for a touchdown, but the pass was slightly overthrown.

It's the second straight slow start for the Vikings on the road against a divisional opponent. They got down three touchdowns at Lambeau Field before having the ball with a chance to win the game and ultimately losing, 21-16, after Cousins threw a costly interception to Kevin King.

After getting just two drives in the opening 30 minutes, the Vikings got the ball to start the second half. They had it for all of one play. Khalil Mack beat Riley Reiff on the edge, got a strip sack of Cousins and the Bears recovered. The Vikings defense limited the Bears to a field goal and a 13-0 lead.

Fumbling has been an issue for Cousins. He had two on Sunday and has six through four games. In 20 games as the Vikings’ quarterback, he’s fumbled 15 times and lost nine.

If not for a Dalvin Cook 2-yard touchdown with 2:58 left in regulation, the Vikings were looking at being shut out for the first time since a 34-0 loss at Green Bay in November of 2007.

The Vikings entered Sunday with Cook the top running back in the NFL, and the team being the No. 2 rushing offense in the league. But Cook had nowhere to run most of the game, finishing with 14 carries for 35 yards.

The Vikings averaged just 3.8 yards per play on Sunday, with Cousins getting little time to throw against the swarming Bears’ defense. Cousins finished 22-of-36 passing for 233 yards.

For a key divisional game early in the season, it was about as poor a performance as the Vikings could have in a big spot. It was also another long day for Cousins, and it isn't the first time it's happened against an NFC North opponent, home or road.

The Vikings, now last place in the NFC North, must re-group as they head to New York next Sunday to face the 2-2 Giants.