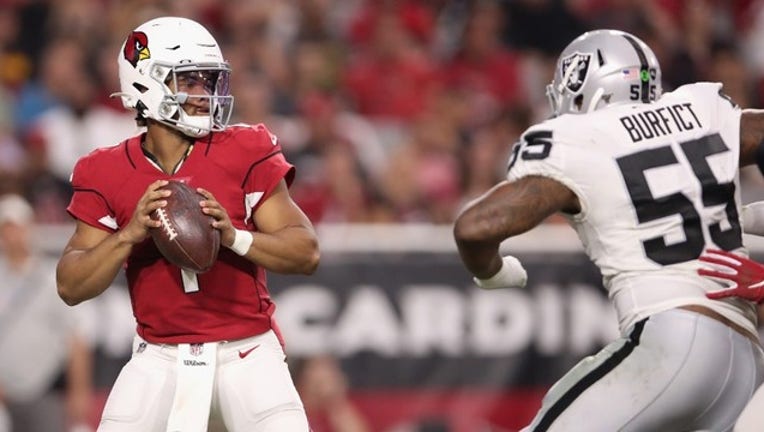 Quarterback Kyler Murray #1 of the Arizona Cardinals drops back to pass during the first half of the NFL preseason game against the Oakland Raiders at State Farm Stadium on August 15 in Arizona. (Photo by Christian Petersen/Getty Images)

EAGAN, Minn. (FOX 9) - The Vikings’ defense is known for being among the toughest in the NFL and is always ready for a challenge.

The stats may not show it on paper, but they’ll get another one on Saturday in the third preseason game against the Arizona Cardinals at U.S. Bank Stadium. It’s essentially the dress rehearsal for the regular season, the game where the starters play the longest.

The No. 4-ranked defense in the NFL last year, which was also the best in 2017, will get tested against rookie Kyler Murray. The No. 1 overall pick had his professional choice between football and baseball, but the chance at becoming an NFL star was too good to pass up.

He was the quarterback last year behind one of the top offenses in college football at Oklahoma. Murray completed 69 percent of his passes last year for more than 4,300 yards and 42 touchdowns, with only seven interceptions. He also won the Heisman Trophy.

“I’ll tell you, this guy can really get out and run. He’s very efficient in throwing the football, so we’ve got to be good in our rush plan this week and make sure that he’s not out scrambling a bunch,” Vikings defensive coordinator George Edwards said.

Murray is just as likely to make plays with his feet as he is with his hands. Mobile quarterbacks tend to be at their most dangerous when they freelance and give themselves time to make plays.

The Vikings will face a pair of mobile quarterbacks this season within their own division: Aaron Rodgers and Mitchell Trubisky. They’ll also have to contain Patrick Mahomes in Week 9, Dak Prescott in Week 10 and Russell Wilson in Week 13

They’ve already faced at least three of them this preseason with former teammate Teddy Bridgewater and Taysom Hill of the New Orleans Saints. Last week, it was Wilson with the Seattle Seahawks. The Vikings kept him out of the end zone, and he managed 82 yards on six completions with a 95.6 rating.

Linebacker Eric Kendricks, one of the Vikings’ top tacklers last season, is looking forward to the challenge Murray presents. After all, they’ve got plenty of experience with mobile quarterbacks.

“I mean I guess it’s got us ready to run. These guys are no joke man. They get out of the pocket and they get squirrelly, so it’s a nightmare for a defense but it’s a good challenge,” Kendricks said.

After dominating last year with the Sooners, Murray is experiencing the adversity that comes with being a rookie in the NFL. In his first preseason game, he was 6-of-7 passing for 2 yards and a 95.2 rating. Last week against the Oakland Raiders, he was just 3-of-8 for 12 yards and a 45.8 rating.

So far, only Bridgewater has had tangible success against the Vikings’ defense in the preseason. He was 14-of-19 for 134 yards, a touchdown and a 110.4 rating.

Murray is a rookie still getting his feet wet and hasn’t put up the gaudy numbers yet. It doesn’t mean he’s not a threat when he has the ball.

“I see he’s a hell of an athlete so I’m just excited for the opportunity honestly,” Kendricks said.

The Vikings have already spent time in several team situations putting together defensive packages to contain quarterbacks. They’re showing a variety of blitzes, and doing everything they can to keep Kirk Cousins, Sean Mannion and Kyle Sloter off balance.

There have already been times in Training Camp where they’ve all had to scramble immediately, or throw the ball away before even getting a chance to read the defense.

The combination of getting pressure on Murray, or any other mobile quarterback, and not letting receivers get open is the ultimate way to contain an offense.

The Vikings are ready to give it a try against the No. 1 overall pick in April’s NFL Draft.

“We always say pass rushing and coverage go hand in hand, so we’ve got to do a great job in both departments to keep him bottled up,” Edwards said.

With nose tackle Linval Joseph returning to practice Tuesday and Shamar Stephen’s re-emergence in camp practices, the Vikings are getting closer to having their full starting defense back. Saturday’s third preseason game means this much: Football that counts is just around the corner.

“It’s about that time. It’s about the time to really do this thing for real. I think we’re just taking it to the next level, and we’re taking it serious,” Kendricks said. “Coming out here every day trying to get better.”