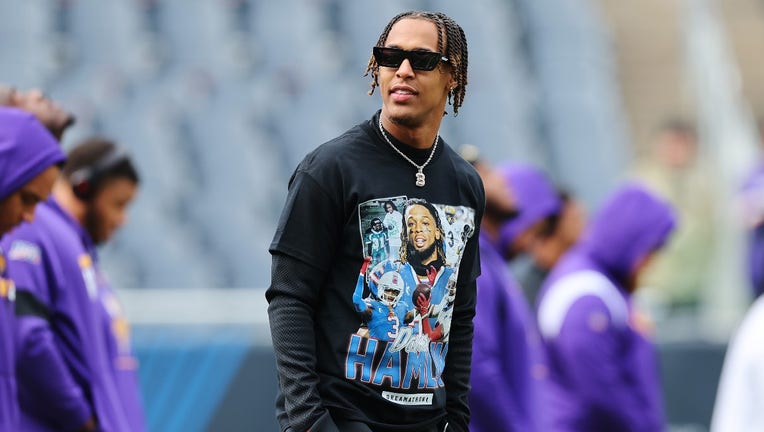 Cornerback Cameron Dantzler Sr. #3 of the Minnesota Vikings wears a Damar Hamlin shirt prior to the game against the Chicago Bears at Soldier Field on January 08, 2023 in Chicago, Illinois.  ((Photo by Michael Reaves/Getty Images))

MINNEAPOLIS - The Minnesota Vikings host the New York Giants in the NFC Wild Card Playoffs at 3:30 p.m. Sunday in a game you can watch on Fox 9.

The Vikings will be without defensive back Cam Dantzler, who was declared inactive 90 minutes before kickoff. Dantzler did not practice all week, and has been listed on the team’s injury report with an ankle issue. Dantzler also missed practice Wednesday due to what the team called a personal matter.

The Minnesota Vikings play the New York Giants at 3:30 p.m. on Sunday, beginning hope they hope will be a deep playoff push.

Vikings coach Kevin O’Connell said Friday Dantzler is dealing with "a pretty serious" personal matter and would be listed as questionable going into the game. Dantzler went to Instagram late in the week to thank people for their prayers and concern. He’s also missed seven of the last nine regular season games with an ankle issue.

The Vikings will get center Garrett Bradbury back for the first time in a month. He’s missed five straight games with a back injury, but practiced all week and does not carry an injury designation into Sunday’s game. With Bradbury back, the offensive line gets some stability with Brian O’Neill and Austin Schlottmann both on injured reserve.

Harrison Smith and Za’Darius Smith are also back after missing last Sunday’s game at Chicago.

It’s Minnesota’s first home playoff since the "Minneapolis Miracle" in 2018. A win, and the Vikings head west for the NFC Divisional Playoffs next weekend after the San Francisco 49ers beat the Seattle Seahawks 41-23. Lose, and the season is over.