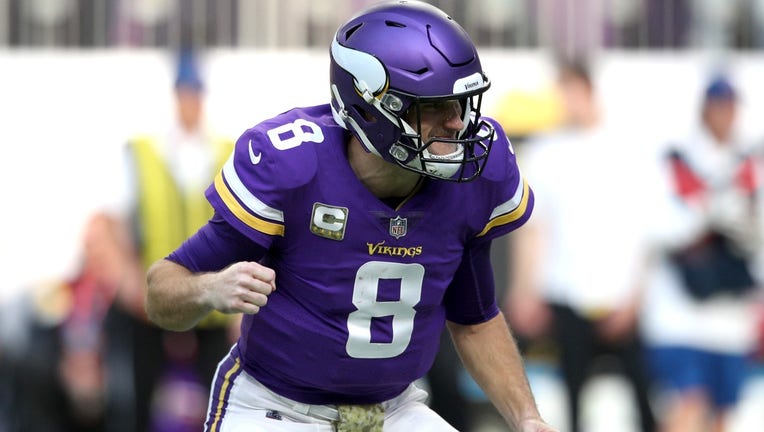 Kirk Cousins #8 of the Minnesota Vikings reacts after a touchdown in the first quarter at U.S. Bank Stadium on November 21, 2021 in Minneapolis, Minnesota.  ((Photo by David Berding/Getty Images))

MINNEAPOLIS - Kirk Cousins threw for 341 yards, averaged nearly 10 yards per completion and had three touchdowns in Saturday’s 34-31 win for the Minnesota Vikings over the Green Bay Packers.

Cousins also had two interceptions overturned, one on a roughing the passer call and the other after Darnell Savage didn’t complete the process of making the catch. On that same game-winning drive, Cousins had a pass to Adam Thielen for a big gain that was nearly intercepted.

There's nothing like a good battle between rivals like the Minnesota Vikings and Green Bay Packers. Ahead of Sunday's game, we checked in with fans excited for the big game.

Cousins hit Justin Jefferson, Thielen, Tyler Conklin and others for big plays on Sunday. After the win, he said he thought some of the throws might have been too aggressive.

"I don't think you want to live doing it. I think we got away with it a couple times, and I keep saying word razor's edge, but that's a play where it's an example of it," Cousins said. "You don't want to live in a world throwing the ball into a covered player and crossing your fingers. You don't want to live in that world. There's a time and place for it, but you also want to be a smart football player."

"I thought he made some great decisions. I want him to keep doing it like he’s doing it. He can’t second guess himself. If he throws an interception, that’s life," Zimmer said. "Keep going for the jugular, it’s going to open up a lot of other areas."

Cousins has thrown for at least 300 yards four times this season, and the Vikings are 3-1 in those games. The only loss was Week 1 at Cincinnati, where Cousins was leading a potential game-winning drive before Dalvin Cook fumbled, and the Bengals kicked a field goal to win.

Cousins, Zimmer and the Vikings have taken criticism this season for not being aggressive in throwing the ball down field with regularity. They took chances against the Packers, and it paid off.

Mike Zimmer had a game ball to give out Sunday after the Vikings beat the Packers, but it wasn’t to a player. It was to equipment manager Dennis Ryan, who missed his first game in 45 years after testing positive for COVID-19.

Ryan had been on the Vikings’ sideline for 705 straight games, hadn’t missed a regular season game since 1979 and had been at every home game since 1977.

The good news for Ryan? Zimmer said he’s doing fine, and is expected back at TCO Performance Center later this week.

Sunday’s win over the Packers was big in many ways for the Vikings. They’re now on a two-game win streak, back at .500 for the second time this season and 2-0 in the NFC North Division. They’re also currently the No. 6 seed in the NFC Playoffs, holding one of three Wild Card spots.

Minnesota’s win over Green Bay was one of 11 over the last three weeks by teams with a below .500 record against a division leader. That’s the most since the NFL merger in 1970.

In the NFC Playoff race, the Vikings join the New Orleans Saints and San Francisco 49ers at 5-5, and hold tiebreakers over both. Minnesota heads to San Francisco this Sunday in a huge game for both teams. The Vikings are also 2.5 games behind the Packers in the NFC North, but there’s still seven games to play.

"There’s so many things that are happening in the NFL right now that we’ve just got to keep trying to win games. 6-5 isn’t our goal, we don’t want to be 6-5. We want to be 12-5 if we can," Zimmer said. "If we can get another win, then we can hopefully stack a few together."