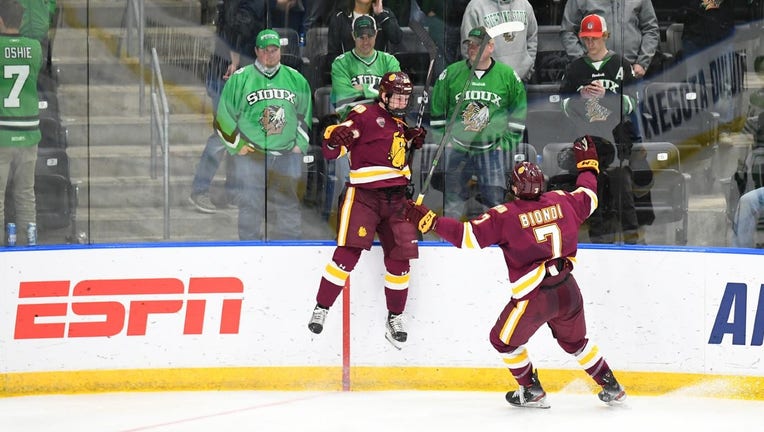 MINNEAPOLIS - In what’s now the longest hockey game in the history of the NCAA Tournament, Minnesota-Duluth beat North Dakota 3-2 in five overtimes Saturday night in Fargo to advance to its fourth straight Frozen Four.

At the 2:13 mark of the fifth overtime, Luke Mylymok beat North Dakota beat Adam Scheel for the game-winning goal in an epic, marathon game that was in its eighth period. The Bulldogs had a 2-0 lead late in the third period before North Dakota rallied with a pair of goals, with Scheel pulled, to force overtime.

The winning goal came at 142 minutes, 13 seconds and in the fourth overtime, it became the longest hockey game in NCAA Tournament history. Back in 2000, St. Lawrence beat Boston College in a game that lasted 123 minutes, 53 seconds.

The Bulldogs looked like they won the game after scoring about seven minutes into the first overtime. But after a lengthy video review, the goal was disallowed as the play was deemed offsides.

UMD goalie Zach Stejskal made 57 saves in 124 minutes, 37 seconds, and had to leave the game during the fourth overtime due to cramps.

It was the Bulldogs’ first game of this year’s NCAA Tournament. They were scheduled to face Michigan in the regional semifinal, but couldn’t play due to COVID-19 protocols and the game was canceled, allowing UMD to advance.

For the Gophers, it was a far less dramatic night in Colorado. Minnesota led Nebraska-Omaha 3-1 after the first period. The Gophers were never seriously challenged in a 7-2 victory, and they’ll play Minnesota State University-Mankato Sunday night for a trip to the Frozen Four.

For the first time ever, all five Minnesota Division I teams (St. Cloud State, Minnesota, UMD, Bemidji State and MSU-Mankato) made the NCAA Tournament. The Bulldogs are now in the Frozen Four, St. Cloud State can get there with a win over Boston College and the Gophers battle the Mavericks for the other spot among Minnesota teams.

That means by the end of Sunday, three Minnesota teams could be among the Frozen Four playing for a national title.