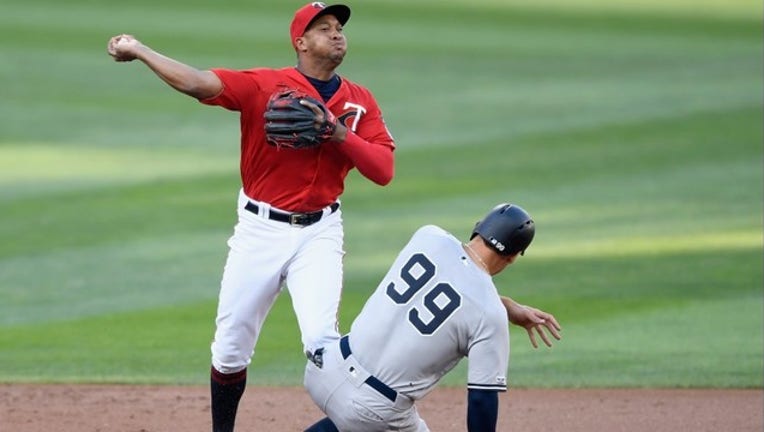 Aaron Judge #99 of the New York Yankees is out at second base as Jonathan Schoop #16 of the Minnesota Twins turns a triple play during the first inning Monday at Target Field in Minneapolis. (Photo by Hannah Foslien/Getty Images)

MINNEAPOLIS (FOX 9) - It didn't take long for some excitement to happen at Target Field Monday night as the Minnesota Twins started a three-game series with the New York Yankees.

The Yankees' first two batters got on in the first, and with Edwin Encarnacion up, Martin Perez got him to hit a sharp grounder to third. Luis Arraez fielded it cleanly, stepped on third and threw to Jonathan Schoop at second. He turned it to Miguel Sano at first as the Twins turned a rare triple play.

It was an early big play for the Twins in an 8-6 win over the Yankees.

It was Minnesota's first triple play since June 1, 2017, when Sano, Brian Dozier and Joe Mauer turned one at the Los Angeles Angels of Anaheim. It's the 13th triple play in Twins history.

The fireworks didn't stop there. Jorge Polanco blasted a solo homer to left center in the bottom of the first, and Nelson Cruz followed with another solo shot off C.C. Sabathia to give the Twins an early 2-0 lead over the Yankees.

The Twins' power surge didn't stop there as Max Kepler and Mitch Garver each added home runs off Sabathia in the fourth. Garver homered again in the sixth with the Twins up 7-6, his 19th of the season, for the final cushion. The Twins hit five home runs on the night and have 187 on the season to lead Major League Baseball. It was the eighth time this season they've hit at least five home runs in a game, which also leads MLB. There's only one other team that's done that in baseball history -- the 1977 Boston Red Sox.

The Yankees had runners at first and third with one out in the ninth and the Twins leading 8-6, but Taylor Rogers struck out Gary Sanchez. Former Twin Aaron Hicks grounded out to Rogers to end the game.

The Twins' lead in the AL Central remained at three games over Cleveland after the Indians won their series opener at Toronto Monday night. The Yankees entered the night a nine-game lead over Tampa Bay in the AL East.