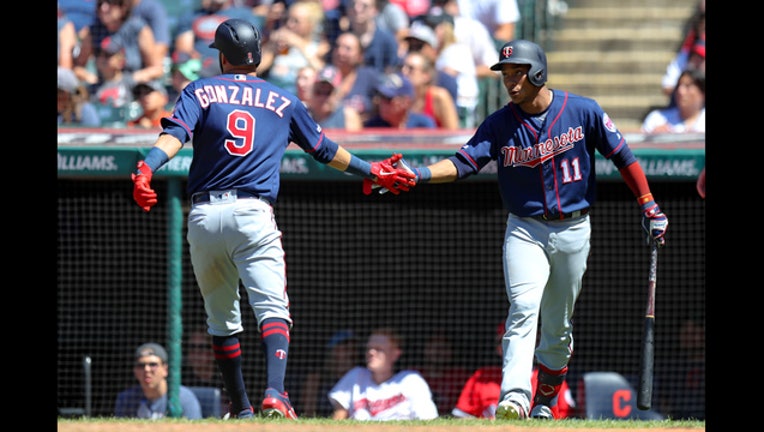 MINNEAPOLIS (FOX 9) - The Minnesota Twins couldn't complete the weekend sweep Sunday, but have a 6.5 game lead in the American League Central Division after taking two out of three at Cleveland in the first series after the All-Star break.

In arguably the biggest three-game series of the season so far, the Twins came from behind to beat the Indians 5-3 Friday night. Jorge Polanco provided the heroics with a go-ahead two-run double in the seventh inning to give the twins a 4-3 lead. Mitch Garver homered in the eighth to give the Twins a 5-3 cushion.

The Twins entered Sunday's series finale with a 7.5 game lead over the Indians. Trailing 3-0, the Twins scored three runs in the top of the seventh to tie the game 3-3. They came on a Marwin Gonzalez single, Cave being hit by a pitch and Kepler hitting a bloop single to tie the game. But Polanco and Cruz each struck out with the bases loaded, ending the threat.

The next inning, Carlos Santana homered to right off Trevor May on an 0-2 pitch to give the Indians a 4-3 lead. Brad Hand, after Ehire Adrianza reached on a lead-off error in the ninth, struck out Schoop, Kepler and Polanco to end the game.

After tossing a scoreless inning in the All-Star Game, Jose Berrios struggled with his command early. He went five innings, allowing three earned runs on six hits while striking out six and walking three. He needed 21 pitches to get through the first inning, yet only allowed one run and left two Cleveland runners on.

Berrios also became the fastest pitcher in Twins and Washington Senators history on Sunday to record his 500th career strikeout.

Shane Bieber went 6 1/3 innings for the Indians, allowing three earned runs on five hits while striking out nine. Earlier in the week, Bieber was named the All-Star Game MVP after striking out the side in his relief appearance.

All things considered, the weekend series couldn't have gone much better for the Twins in what was considered the most important series of the season for the Indians. The Twins (58-34) currently have the second-best record in the American League.

They now head home for nine straight games at Target Field. They host the New York Mets for a two-game series starting Tuesday, then host the Oakland Athletics for four games and the New York Yankees for three.

The Twins face the Indians 10 more times this season, with the next seven straight at Target Field.