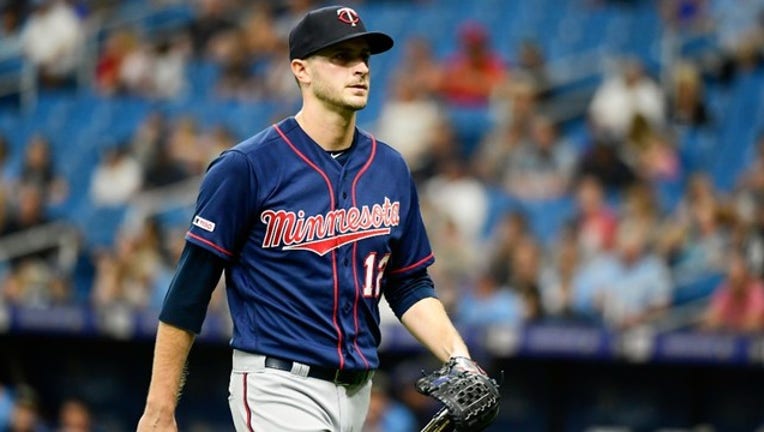 (FOX 9) - Sunday the pitchers and reserve players were announced for the 2019 All-Star game, and the Minnesota Twins will be sending one more player to Cleveland: Starting pitcher Jake Odorizzi.

Odorizzi, who is 10-3 in 16 starts with a 2.73 earned run average, will join shortstop Jorge Polanco, who will start the game, as the only players representing the Twins at the Mid-Summer Classic. Odorizzi has 94 strikeouts and 27 walks in 16 starts, 85 2/3 innings pitched.

Polanco learned during Thursday's  5-2 loss in 18 innings to the Tampa Bay Rays that he had won the voting to be the starting shortstop in the All-Star Game. He's the first Twins player to earn a starting spot since Joe Mauer in 2013. Polanco has had a strong start after missing the first 80 games of last season due to a suspension for testing positive for performance-enhancing drugs.

This is the first All-Star game selection for both Odorizzi and Polanco.

Despite having one of the best offenses in the American League, none of the Twins' other position players were selected as reserve players for the All-Star Game. Max Kepler, Eddie Rosario, C.J. Cron, Nelson Cruz and Byron Buxton were all potentially up for All-Star consideration.

In 75 games, Kepler is hitting .269 with an on base-plus slugging percentage of .892. His 21 homers leads the Twins and is tied for 14th in Major League Baseball and tied for 6th in the American League. His 53 RBI also rank second on the Twins.

Cruz is hitting .284 with a .945 on base-plus slugging percentage and has 16 homers on the season. He hit three this past weekend in a three-game series against the Chicago White Sox.

Buxton, in addition to being one of the top center fielders in baseball, is hitting .262 and is tied for 10th in the major leagues with 22 doubles.

Also notably not on the All-Star roster is reliever Taylor Rogers. While not a household name, Rogers is 2-1 on the season as a relief pitcher with a 1.98 ERA and 44 strikeouts to go with just seven walks in 36 1/3 innings pitched. He's been the most consistently dominant reliever the Twins have had this season.

The Twins lead the big leagues as a team with 157 home runs, and lead MLB with a .496 slugging percentage. After Sunday's loss to the White Sox, the Twins (53-30) are the second-best team in the American League behind the New York Yankees (54-28).

The Twins have an eight-game lead over Cleveland in the AL Central as they open a three-game series Tuesday night at Oakland. They then host the Texas Rangers for three games at Target Field before the All-Star break.

Their most important series of the season might come immediately after the All-Star Game. The Twins travel to Cleveland for a three-game set at Progressive Field July 12-14.