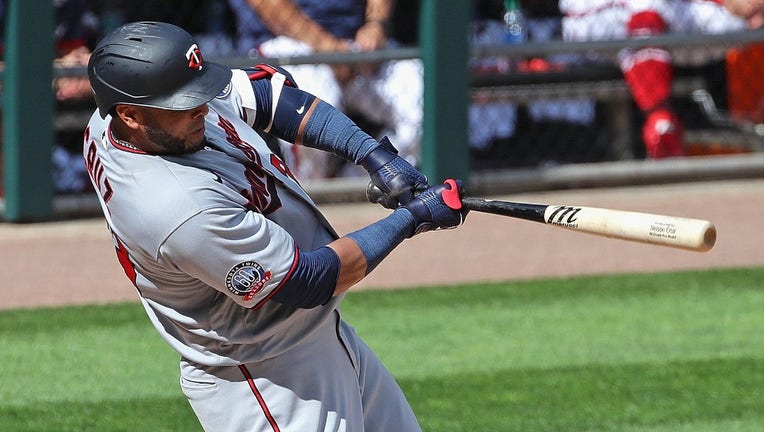 Nelson Cruz #23 of the Minnesota Twins hits a three run home run in the 8th inning against the Chicago White Sox at Guaranteed Rate Field on July 26, 2020 in Chicago, Illinois. ((Photo by Jonathan Daniel/Getty Images))

MINNEAPOLIS - After a torrid weekend at the plate, Minnesota Twins designated hitter Nelson Cruz was named the American League Player of the Week.

He's designated to hit, and did he ever. Over three games against the Chicago White Sox, Cruz hit 7-for-13 (.538) with three homers, two doubles and 10 RBI as the Twins scored 27 runs in the series, winning two out of three. He also scored seven times in the series.

Cruz went 4-for-5 on Sunday with two homers, two doubles, seven RBI and had 12 total bases on the day as the Twins beat the White Sox 14-2. His bases clearing double in the second gave Minnesota a 7-0 lead. He later hit a solo homer to left center off Gio Gonzalez, and added a three-run homer.

Cruz had a 1.385 slugging percentage for the series. As a team, the Twins hit seven homers over the three-game series. Cruz led the Twins with 41 homers last season.

At 40 years old, he doesn’t appear to be slowing down any time soon.

The Twins are back home and host the St. Louis Cardinals for the 2020 Home Opener at Target Field Tuesday night. It’s the start of an eight-game home stand.