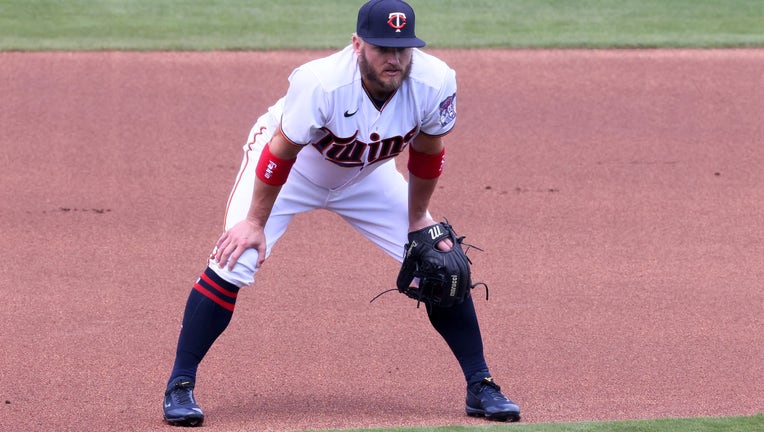 Josh Donaldson #20 of the Minnesota Twins in action against the Baltimore Orioles in a spring training game at the CenturyLink Sports Complex on March 09, 2021 in Fort Myers, Florida. (Mark Brown / Getty Images)

MINNEAPOLIS - The Minnesota Twins got some relatively good news about Byron Buxton, Luis Arraez and Josh Donaldson before taking the field to play the Detroit Tigers Tuesday afternoon.

Buxton, who didn’t play Monday and left Sunday’s game at Milwaukee due to illness, ran around on the field and took batting practice before the Twins faced the Tigers. Buxton then hit a game-tying solo homer to left center in the eighth inning. Twins officials said Sunday Buxton’s illness was not COVID-19 related, and he would be considered day-to-day.

Buxton’s homer on Tuesday was his third of the season, which is tied for the team lead.

Arraez was in the starting lineup Tuesday after looking visibly uncomfortable during an at-bat Monday in which he drew a walk. On a check swing, Arraez stepped out of the box and repeatedly touched his upper chest area. He convinced Rocco Baldelli and the Twins’ training staff to stay in the game, and he was diagnosed after with intestinal distress, similar to Buxton’s issue. He was cleared to play Tuesday after it was determined his ailment was not COVID-19 related.

It appears Donaldson might be getting closer to returning as well. Baldelli said before Tuesday’s game he ran on a treadmill at a steady pace, and got on the field pregame in Detroit to take batting practice. Donaldson was put on the 10-day injured list after getting one at-bat and playing just a half inning last Thursday at Milwaukee.

He doubled in the first inning, and suffered a left hamstring injury while rounding first base. Twins officials Donaldson’s injury is not related to his calf, which has given him problems over his career and forced him to miss half of last season, including the playoffs.

"He was very eager to get back out on the field today and take some swings on the field. The way he’s acting, the way he’s responding to everything has been very good. He’s responded well," Baldelli said.