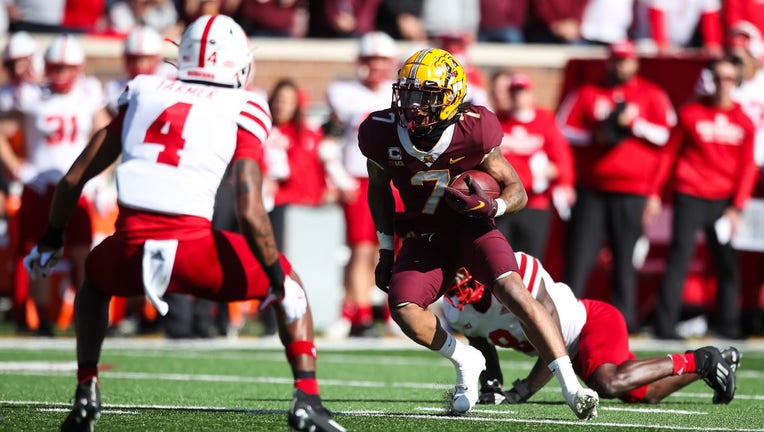 Chris Autman-Bell #7 of the Minnesota Golden Gophers avoids a tackle by Deontai Williams #8 while Myles Farmer #4 of the Nebraska Cornhuskers defends in the second quarter of the game at Huntington Bank Stadium on October 16, 2021 in Minneapolis, Min ((Photo by David Berding/Getty Images))

MINNEAPOLIS - The University of Minnesota football team is getting its top receiver back for the 2022 season.

Chris Autman-Bell announced on social media Thursday night he’s returning to the Gophers for one more year. Autman-Bell led Minnesota in receiving this season with 35 catches for 490 yards and six touchdowns, despite missing the first two games with an ankle injury suffered in fall camp.

Autman-Bell also missed most of the Gophers’ loss to Bowling Green with an injury after his first reception. He joins quarterback Tanner Morgan and running back Mohamed Ibrahim as top play-makers for the Gophers’ offense next season.

Earlier this week, Minnesota coach PJ Fleck announced Kirk Ciarrocca is coming back as offensive coordinator and quarterbacks coach after parting ways with Mike Sanford Jr. The Gophers are now in preparation to face West Virginia in the Guaranteed Rate Bowl on Dec. 28 in Phoenix, Ariz.