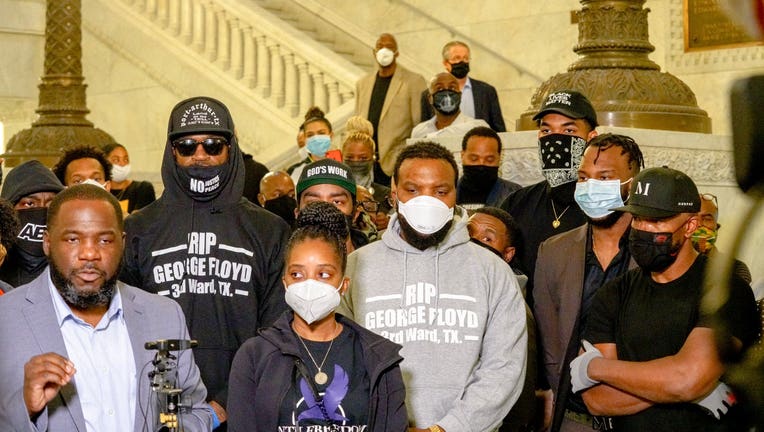 Timberwolves star Karl-Anthony Towns made his first public appearance since his mother's death from Covid-19 Friday, attending a rally held by NBA star Stephen Jackson to speak out on the death of George Floyd. ((credit: Minnesota Timberwolves))

Towns was seen standing behind fellow NBA star Stephen Jackson during an event in downtown Minneapolis. Jackson was close friends with George Floyd, who died Monday night in an officer-involved incident in Minneapolis. Tensions have escalated with the community and the Minneapolis Police Department since Floyd’s death.

Officers responded to the area of 38th and Chicago Monday night on a report of a forgery in progress. A worker at Cup Foods reportedly told police Floyd bought cigarettes with a counterfeit $20 bill and appeared to be “under the influence.”

Officers at the scene located him in his car, and he eventually was spotted on video being pinned to the ground by Chauvin’s knee on his neck. As many as four officers responded to the call, and multiple officers kept him on the ground despite his pleas and screaming, “I can’t breathe.”

After several minutes with Chauvin’s knee on his neck, Floyd appears to lose consciousness before being taken by ambulance to Hennepin County Medical Center, where he was later pronounced dead.

Three days of demonstrations got their most dangerous Thursday night, with riots breaking out at the police department’s Third Precinct, near where Floyd died. Demonstrators breached the precinct and set fires, law enforcement inside the building evacuated due to safety concerns and the building was destroyed.

Chauvin was charged Friday with third degree murder and manslaughter. The other three responding officers are in custody, but formal charges have not been announced.

Jackson held another event outside the Hennepin County Government Center Friday afternoon to speak out on Floyd’s death.

It’s been a tough few months for Towns, who had his mother die of complications from Covid-19 and his father was also diagnosed, but eventually got released from a hospital. Fellow Wolves' teammate Josh Okogie, who spoke out about Floyd's death on social media earlier this week, also attended Friday's rally.

The Wolves started voluntary individual workouts at Mayo Clinic Square, but it's not known if Towns took part. The NBA suspended its season on March 12 after Utah Jazz forward Rudy Gobert tested positive for Coronavirus.