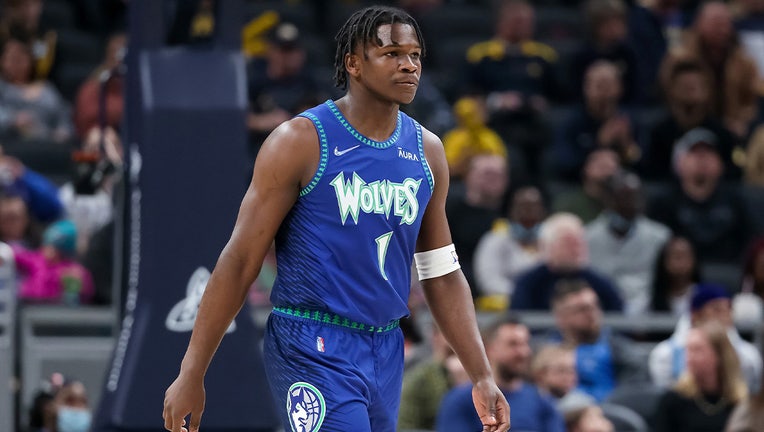 Although Timberwolves Rising Star Anthony Edwards has already proven himself on the basketball court, fans will soon be able to see whether or not he's any good at acting as well.

MINNEAPOLIS - Minnesota Timberwolves star Anthony Edwards has become a fan favorite since the team drafted him No. 1 overall two years ago, but he found himself in hot water after recently posting a video making some inappropriate comments.

Edwards took to social media on Sunday to apologize after posting a video to his Instagram story, filming a group of men on a sidewalk. He says both a racial and homophobic slur, making an assumption that the men are homosexual based on their appearance. He also says, "Look what the world done came to."

The Minnesota Timberwolves All-Star Karl-Anthony Towns officially announced the signing of a new contract that will keep him in Minnesota another four years beyond his current deal. FOX 9’s Pierre Noujaim has the latest from the press conference.

On Sunday, Edwards tweeted, "What I said was immature, hurtful, and disrespectful, and I’m incredibly sorry. It’s unacceptable for me or anyone to use that language in such a hurtful way, there’s no excuse for it, at all. I was raised better than that."

On Monday, the Timberwolves President of Basketball Operations Tim Connelly issued a statement on Edwards.

"We are disappointed in the language and actions Anthony Edwards displayed on social media. The Timberwolves are committed to being an inclusive and welcoming organization for all and apologize for the offense this has caused to so many," Connelly said.

Edwards could be subject to discipline by the NBA for the remarks. It’s not clear whether he would face a suspension, fine or both. Back in 2018, Nikola Jokic was fined for making homophobic comments made during a postgame interview. Kevin Durant was fined in April of 2021 after making a homophobic rant at Michael Rapaport.

Edwards deleted his video shortly after posting it, but it was up long enough for users to record it and make it go viral. The Timberwolves could also discipline Edwards, regardless of what NBA officials decide to do.

Edwards started 72 games last season and averaged 21.3 points and 4.7 rebounds per game, becoming a complementary star to Karl-Anthony Towns. The Wolves will embark on training camp soon, with their first preseason game coming on Sept. 30.