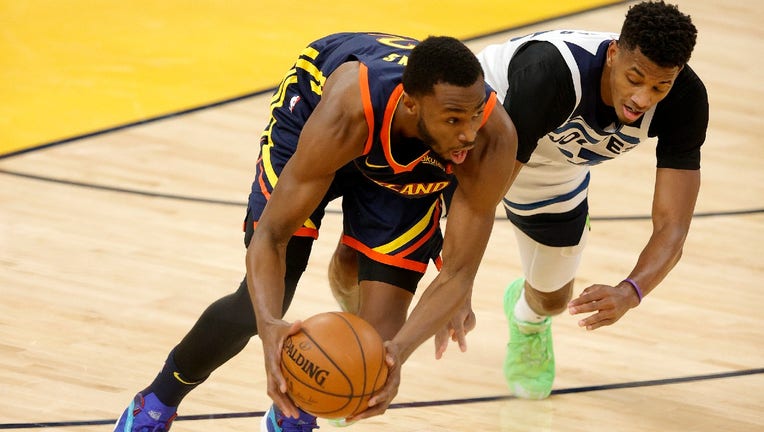 Andrew Wiggins #22 of the Golden State Warriors and Jarrett Culver #23 of the Minnesota Timberwolves go for a loose ball at Chase Center on January 25, 2021 in San Francisco, California. ((Photo by Ezra Shaw/Getty Images))

MINNEAPOLIS - For the first time since the February 2020 trade that brought D’Angelo Russell to Minnesota, the Timberwolves faced former No. 1 overall pick Andrew Wiggins Monday night out on the West Coast.

In the first game against his old team, Wiggins scored 23 points on 10-of-19 shooting, including 2-of-5 from the perimeter. He added six rebounds and three steals as the Golden State Warriors beat the Timberwolves 130-108.

In 17 games this season with the Warriors, Wiggins is averaging 17.8 points, 5.2 rebounds and 2.2 assists per game while shooting 46.2 percent from the field, including 40.7 percent from the perimeter. He’s getting a bigger role in Golden State’s offense, with Klay Thompson out injured.

Minnesota was without Karl-Anthony Towns, who is still in the NBA’s health and safety protocols after testing positive for COVID-19 more than a week ago. The Timberwolves were also without Russell, who showed up on the injury report with a quad injury after sitting out Saturday’s 120-110 win over the New Orleans Pelicans due to rest.

Since Russell was brought to Minnesota in that trade that sent Wiggins to the Warriors, Towns and Russell have played a total of five games together. Malik Beasley led the Wolves with 30 points, and Anthony Edwards and Jordan McLaughlin added 15 each.

The only real highlight for the Wolves came from Edwards, this year’s No. 1 overall pick after Minnesota finished last season 19-45. Edwards got a pass at the top of the key during the first half and drove down the middle of the lane for a thunderous one-handed dunk.

The Wolves dropped to 4-12 with the loss and are just 2-12 in their last 14 games. Minnesota continues a busy stretch, which includes four games over the next seven days, at Golden State Wednesday night. They return to Target Center for home games Friday night against the Philadelphia 76ers and Sunday against the Cleveland Cavaliers.