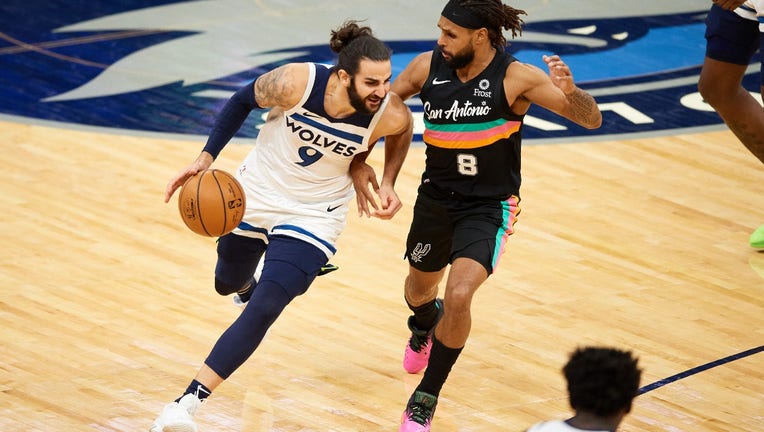 MINNEAPOLIS - The Minnesota Timberwolves said going into Sunday night’s game against the San Antonio Spurs that they were tired of losing.

The Wolves let their play do the talking, and ultimately end a seven-game losing skid with a 96-88 win over the Spurs at Target Center. The Wolves improved to 3-7, and got the win without star Karl-Anthony Towns, who is managing his minutes after returning from a dislocated left wrist Saturday night against the Spurs.

Towns came back and scored 25 points, added 13 rebounds, four assists and three blocks as the Wolves lost to the Spurs in overtime. Towns missed seven games with the wrist injury, and Minnesota lost all seven of those games.

Sunday, D’Angelo Russell scored 27 points, and Malik Beasley added 24. For the first time this season, the Wolves held an opponent to under 100 points.

"It’s always good to win, but I want it to be a standard in terms of how you play. Defensive grittiness needs to be held in play, executing down the stretch needs to be held in play. I’m happy to break a streak like that, but I’m also happy about moving forward that these guys are showing what they can do when they’re committed to it," Wolves coach Ryan Saunders said after the win.

In his first game back since being out with a hamstring injury, Josh Okogie scored six points and grabbed four rebounds in 20 minutes.

"You always want to be back out there and today it felt really good just to be out there playing and competing," Okogie said.

Beasley, who had his fifth 20-point game of the season Sunday, said the team was determined to get a win after having a lead late on the Spurs before losing in overtime. He’s proving himself every game after signing a four-year, $60 million deal with the Wolves in the offseason.

The Wolves shot 42 percent from the field in the win, including 34.6 percent from the perimeter. There’s still plenty of work to do, but Minnesota now has a few days off before facing the Memphis Grizzlies Wednesday night.

Ricky Rubio said after a recent loss the Wolves had no identity. Their identity is Towns, and they struggled without him in seven straight losses. For at least one night, they could feel good about themselves again.