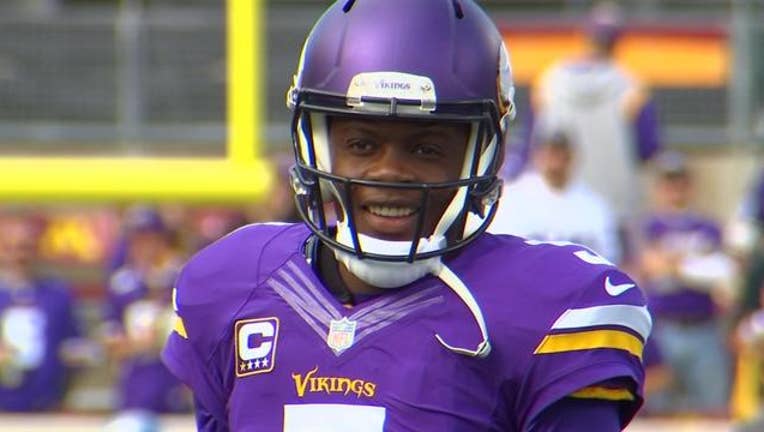 MINNEAPOLIS - The Minnesota Vikings’ franchise took a turn on Aug. 30, 2016, when their potential franchise quarterback went down in practice with a knee injury that nearly ended his NFL career.

It was just another late August practice for the Vikings before their Week 1 opener, until everything changed. Teddy Bridgewater, a first round pick in 2014, had led Minnesota the year before to an 11-5 record and nearly a win over the Seattle Seahawks in the NFC Playoffs.

About a week before the 2016 season was to start, Bridgewater dropped back on a play-action pass with Adrian Peterson in practice. Something he’s done hundreds of times in his playing career, but this time was different. His left leg buckled, he went down in a heap. Most players didn’t actually see what happened, just the aftermath.

Head trainer Eric Sugarman sprinted across the practice field to Bridgewater, took a quick look and put a cast on his leg to keep in intact. An ambulance was called to Winter Park, and there were fears his leg might have to be amputated. Players went to a knee in prayer. They eventually went back into the locker room, and the remainder of practice was canceled.

“That day was tough. Just going from a day at practice, everybody locked in and focused, calling plays and people running around to just complete silence over the entire field. You look over and he’s down on the ground,” safety Anthony Harris said.

“I remember I ran a route on the play and turned around, and when I turned around it was just like a dispersion of bodies. Everybody was just running away. Obviously we know something was really seriously wrong, we went into the locker room and we were done for the day, so you knew it was serious,” tight end Kyle Rudolph said.

We now know Bridgewater tore multiple ligaments in his left knee, and suffered what’s called a tibiofemoral dislocation. To put it in simple terms, the upper and lower parts of his leg separated, and his knee gave out. His season was over, and his career hung in the balance.

The Vikings were without a starting quarterback, and their season was a week away. They traded a first round pick for Sam Bradford, who played 15 games in 2016. Bradford played the first two games of 2017 before requiring knee surgery, then Case Keenum took over and led the Vikings to the NFC title game.

That ultimately led to Rick Spielman going after Kirk Cousins in free agency before the 2018 season.

Defying all odds, Bridgewater returned to the field about 16 months after the injury, playing for the Vikings in Week 15 of 2017 against the Cincinnati Bengals at U.S. Bank Stadium. Dalvin Cook, out for the season with his own knee injury, was on the sidelines for that game. He said the noise for Bridgewater's return rivaled that of the Minneapolis Miracle, Stefon Diggs' walkoff touchdown from Keenum in the playoffs against the New Orleans Saints.

Cook, a fellow Florida native who had his locker right by Bridgewater in his rookie season, leaned on him through adversity. The Florida natives spent plenty of time in the training room together, and one thing always stood out: Bridgewater’s positivity. They cracked jokes, and Bridgewater told him to push forward when rehab got difficult.

“In the down moments, how you bounce back from it and I think Teddy is a great example of that. To have the knee injury was a test to his character, and you’ve seen how he bounced back from it,” Cook said.

Rudolph said in his 10 years with the Vikings, Bridgewater is the most likeable player they’ve had in the locker room.

“You just talk to people in the front office, coaching staff, players that played with him, workers in the cafeteria. Everyone loved Teddy, you loved his energy and positivity that he brought every day, his work ethic that he brought every day,” Rudolph said. “He was a guy who for me personally, I was a huge fan of and was really impressed with the progress he was making leading up to his injury.”

One of Bridgewater’s biggest fans? Vikings coach Mike Zimmer. The two grew close in his three seasons with the Vikings. When the NFL released the 2020 schedule and the Vikings were hosting the Panthers, Bridgewater and Zimmer got in touch, since Bridgewater singed with Carolina in free agency.

“I don’t know if he texted me or I texted him, I told him I was rooting for him in 15 games, just not when we play them. He basically said the same thing,” Zimmer said. “I’m proud of what he’s done, he’s a great kid, great family."

That’s Zimmer’s main focus, leaving Sunday with a victory. Especially after the Vikings couldn’t finish off the Cowboys in a 31-28 loss. It was their first chance to get back to .500 on the season and get closer to the NFC Playoff picture.

Cousins first met Bridgewater when he was a rising high school senior in Florida. Bridgewater was invited to the Elite 11 Camp, and Cousins was a counselor. He soon found out Bridgewater was an excellent video game player, winning a Madden college tournament.

Bridgewater’s attitude stood out most to Cousins.

“I remember him being really the same person he is now. He had a big smile on his face, he had a great positive attitude the whole week. He enjoyed going out, he made football fun and I think he’s been that same guy all the way through his career. He’s faced a tremendous amount of adversity and just responded so well to it,” Cousins said.

Not knowing what his football future held, the Vikings went a different direction as Bridgewater signed with the New Orleans Saints to be the back-up to Drew Brees in 2018. He played in five games, starting once. In 2019, Brees missed five games with a sprained thumb suffered in Week 1. In his absence, Bridgewater went 5-0 as a starter, throwing for more than 1,300 yards with nine touchdowns and just two interceptions.

In 10 starts this year, Bridgewater has more than 2,500 passing yards, 13 touchdowns and seven interceptions. After missing last week's game, Bridgewater is expected to start Sunday at U.S. Bank Stadium.

When current Vikings’ players are asked about Bridgewater, it always comes back to his positive attitude. Rudolph recalled visiting with Bridgewater in his hospital bed the night of his injury, joined by Adrian Peterson and Michael Griffin. Bridgewater was the most positive one in the room.

"The thing that sticks out to me and I’ll always remember is just his positivity. He was joking around with Adrian that his comeback from this knee injury would be far greater than Adrian’s, and Adrian won the MVP the year after he hurt his knee, so that was kind of just Teddy’s positivity and outlook on everything,” Rudolph said.

Zimmer and the Vikings are rooting for Bridgewater to have a successful career after that brutal day in 2016. Just not this week.

"You’re still trying to beat the heck out of him the best you can,” Zimmer said.