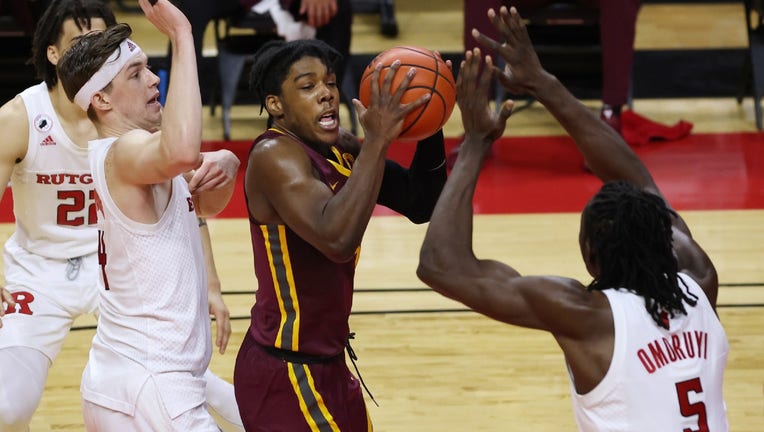 Marcus Carr #5 of the Minnesota Golden Gophers in action against Paul Mulcahy #4 and Clifford Omoruyi #5 of the Rutgers Scarlet Knights during an NCAA college basketball game at Rutgers Athletic Center on February 4, 2021 in Piscataway, New Jersey. R ((Photo by Rich Schultz/Getty Images))

MINNEAPOLIS - The University of Minnesota men’s basketball team dropped to 11-7 on the season and 4-7 in the Big Ten after Thursday night after a 76-72 loss at Rutgers.

It was by far their best performance away from Williams Arena this season, but it still wasn’t good enough for Minnesota’s first road win of the year. Here are a few takeaways from the game.

Richard Pitino said after the loss he thought the Gophers were really good for 37.5 minutes. Unfortunately for Pitino and the Gophers, college games are 40 minutes and it’s the last two he’d like to have back. Marcus Carr, an All-Big Ten guard and top-10 finalist for the Bob Cousy Award, missed two shots in the final minute that would’ve put the Gophers ahead. The first was a step back jumper he’s hit before, the second was an air ball on a contested 3-pointer.

Carr led the Gophers with 18 points and seven assists, but didn’t executed when the game mattered most in crunch time.

Minnesota remains winless on the road

The Gophers are a really hard team to figure out. Thursday’s loss featured 22 lead changes, and they got 44 points combined from Carr, Liam Robbins and Brandon Johnson. Minnesota is 11-1 at Williams Arena, with the only loss coming to Maryland. But away from home, the Gophers have had all sorts of problems finding a way to win. They’re now 0-6 on the road, despite Thursday’s game being their most competitive effort. They led by six points twice in the second half, but couldn’t finish. They’re going to have to find a way to win on the road to be an NCAA Tournament team.

Is an NCAA bid slipping away?

The Gophers have lost three straight, and five of their last six. It’s time to be nervous about them getting to the NCAA Tournament. They have top 10 wins over Ohio State, Iowa and Michigan. They have a quality win over St. Louis, but until Thursday night, they haven’t been competitive on the road. They host a Nebraska squad Monday night that’s 0-5 in the Big Ten and coming off COVID-19 issues, and it’s as must-win of game as there has been this season. Minnesota has eight Big Ten games left, and needs to find a way to finish at least .500 in league play to earn an NCAA bid. They have home games left against Nebraska, Purdue, Illinois Northwestern and Rutgers. Their road games are Maryland, Indiana and Penn State.

This is Pitino’s most talented squad in his eight years, and if they don’t make the Big Dance, his coaching seat gets very hot.

Gabe Kalscheur’s shooting struggles have been a talking point much of the season. He’s still starting and getting minutes for what he does elsewhere, mainly guarding the opponent’s best offensive player. He scored seven points on 2-of-7 shooting, but committed three costly turnovers on lazy passes. He’s scored in double figures in six of Minnesota’s 18 games. Pitino hasn’t been afraid to shuffle the lineup this season, and one has to wonder if Kalscheur might be next.

Both Gach bounces back

Both Gach has mostly struggled in Big Ten play after getting off to a fast start. Pitino took him out of the starting lineup the last two games for Tre Williams, and Gach has responded. He scored only six points Thursday, but he had a steal and dove on the floor for loose balls like a guy who had lost his starting spot. He provided energy in an area where it was badly needed, even if it wasn’t enough for a win.

The Gophers’ season is at a crossroads. They have four games over the next nine days, and need to find some wins to stay in the NCAA Tournament conversation.